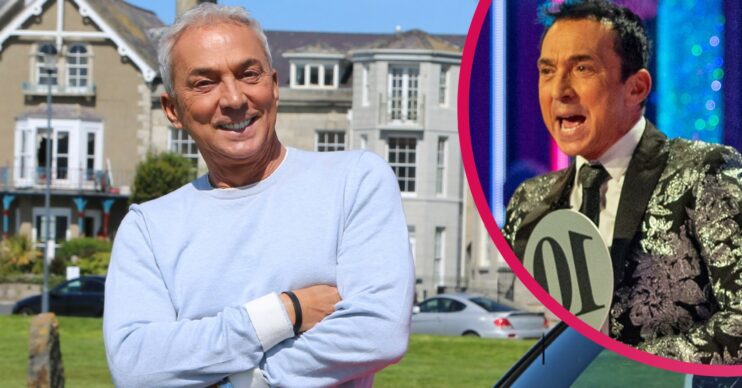 Craig and Bruno’s Great British Road Trips: Is Bruno leaving Strictly? How old is he and is he married?

The Italian tours the UK on ITV1

Bruno Tonioli and Craig Revel Horwood travel the UK together in ITV1’s new travel show Craig and Bruno’s Great British Road Trips – but will Bruno ever return to Strictly?

Former professional dancers Bruno and Craig get in a classic Mini to tour their adopted homeland in the new ITV1 series.

Expect flawless style, flamboyance and a showbiz smattering of bickering!

Here’s everything you need to know about Bruno, his life and career, and his new ITV1 series.

Bruno Tonioli Strictly return: What is Bruno famous for?

In the UK, Bruno is definitely most famous for being a judge on Strictly Come Dancing.

He has appeared on the judging panel since the show started in 2004.

Bruno has also appeared as a judge on the US series Dancing with the Stars on ABC TV.

Italian-born Bruno began his career as a dancer.

In fact, he famously appeared in Elton John’s music video for I’m Still Standing (see below for a giggle).

Bruno is known for being a dancer, choreographer and TV personality.

He’s worked as a choreographer for artists such as Tina Turner, Sting, Elton John, the Rolling Stones, Freddie Mercury and Duran Duran.

He co-created and appeared on the BBC talent show DanceX and its American adaptation, Dance War: Bruno vs. Carrie Ann.

Bruno has published an autobiography called Bruno: My Story.

And did you know, that in 1980, Bruno was part of the group Duke and the Aces who performed in but did not win the UK’s competition to select an entry for the Eurovision Song Contest?

What is Bruno Tonioli’s net worth?

According to Celebrity Net Worth, his net worth is £12 million.

He is said to earn more than £20,000 per episode for appearances on TV shows.

That buys a LOT of fake tan!

How old is he? And where is he from?

Bruno Tonioli was on born on November 25 1955 in Ferrara, Italy.

He is currently 65 years of age.

The dancer is fluent in five languages – his native Italian, as well as English, Portuguese, Spanish, and French.

Is Bruno married – who is his partner?

Bruno is not married, and has never been married.

However, he is said to be in a committed, long-term relationship with much younger partner Jason Schanne.

Bruno has been dating British model Jason since 2010.

In 2012, two years after the pair met, Bruno and Jason had a commitment ceremony.

Their relationship is extremely private and kept out of the spotlight.

You won’t find a sniff of Jason on Bruno’s Instagram, and Jason rarely accompanies Bruno to public events.

Bruno has lived in London on and off since 1975.

Although he was able to film Craig and Bruno’s Great British Road Trips over the summer in the UK, his work commitments in the US mean he is often away.

He lives and works in Los Angeles when he is filming Dancing with the Stars.

Bruno Tonioli Strictly return: Why is Bruno not a judge this year?

The Italian was unable to judge on last year’s Strictly due to Covid-19 travel restrictions.

He appeared instead as a talking head via satellite during the Sunday night show.

Sadly, Bruno will not be appearing in the 2021 series of Strictly either.

On June 24 2021, it was announced that Anton Du Beke would replace Bruno as judge on series 19.

The popular judge always has a hectic autumn schedule, dividing his time between Strictly in the UK and Dancing with the Stars in the US.

He flies back and forth to Los Angeles each week.

He said: “I don’t go out for two months. I stay home in the evenings, I go to the gym and stay fit. It’s like being a nun.

“But I’m very lucky and I will do it for as long as I can and as long as they want me.”

Telling his fans he’ll miss 2021’s series, he said: “Sadly due to current travel regulations and previous work commitments I’ll miss @bbcstrictly this year will miss you all but I know you will be AMAZING.”

There has been no word on whether Bruno will return in 2022 once – or if – travel restrictions ease up.

Bruno has said the decision is ultimately up to the BBC, but that he’d love to return if they want him.

Despite being a well-established judge on the show, the star admitted last year that he has never actually watched it!

Craig Revel Horwood and Bruno Tonioli explore some of the country’s most iconic and best loved road trips in this brand new six-part series.

The two great friends leave the dance floor behind to enjoy some spectacular sights around beautiful Britain.

The Strictly judges visit six of the ultimate scenic routes.

These include Cornwall to the Cotswolds, and the Yorkshire Dales to the Lake District.

In episode one, the begin in Cornwall, bickering their way from Padstow to Penzance.

They stop for a fishing trip in Newquay, a dance with the Fisherman’s Friends and the odd bottle of Cornish rosé.

Will you be tuning in to Craig and Bruno’s new travel show? Leave us a comment on our Facebook page @EntertainmentDailyFix.