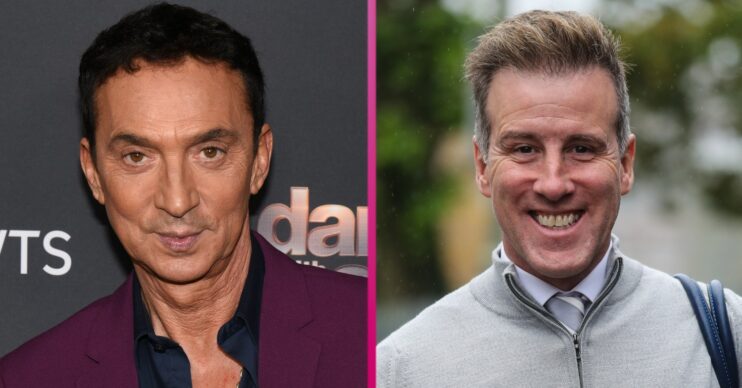 Bruno claimed: 'He was desperate for the job'

Bruno Tonioli has joked his Strictly Come Dancing replacement Anton du Beke “needs the money” as he gets ready to step into his seat alongside the show’s regular judges.

Italian judge Bruno, 65, will not be appearing on the next series of the BBC dance show due to travel restrictions.

And, although he’s open to returning in the future, Bruno also reckons he may no longer be “needed” on Strictly Come Dancing.

Veteran dancer Anton, 54, will fill in on the judging panel once again in 2021.

He did the same last year when Bruno was unable to make it over from Los Angeles for filming.

And although Bruno is “sad and frustrated” with how matters have turned out, he accepts nothing can be done.

He also backed Anton as the “obvious choice” to replace him – even though he wasn’t consulted.

What Bruno makes of Anton as his replacement

Bruno suggested Anton had been very keen on bagging the role.

He reflected to The Sun on Sunday: “I was never asked my opinion, but I wasn’t surprised. [Anton] was desperate to get that judging role, so I’m sure he is delighted.”

Good for him. He needs the money.

Bruno went on to joke to the tabloid: “Good for him. He needs the money.”

The flamboyant telly fave indicated he won’t be tuning in when the new series of Strictly kicks off in the autumn.

Bruno said it would be “very naff” for him to “stick his nose in” when he is inevitably asked what he thinks.

So he has decided not to watch how his replacement fares in his old seat on the panel.

Bruno explained: “Watching Anton would be not fair. It’d be weird, like watching an ex with someone new. You just get on with it, honey.”

Bruno also revealed that he hadn’t heard from any of Strictly’s other judges since the changes were announced.

However, Bruno did acknowledge that Craig Revel Horwood, Shirley Ballas and Motsi Mabuse had made “supportive” statements publicly.

And he also noted how them not being in touch wouldn’t leave him in tears as they have “separate lives”.