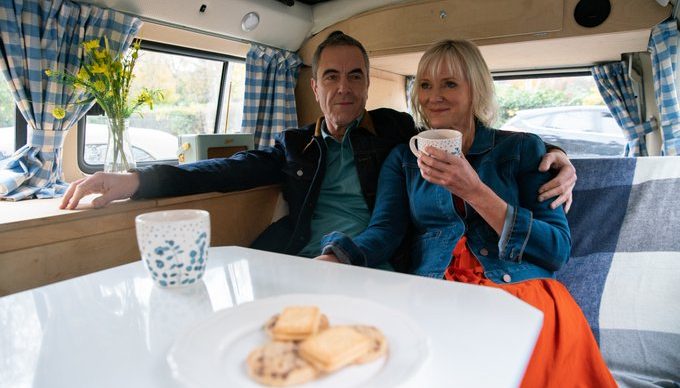 Nothing (yet) planned for the future

The conclusion to series nine of the ITV comedy-drama Cold Feet was bitter-sweet – and not just for the much-loved characters.

Fans of the show had learned earlier in the day that the show would not be back next year and there are no concrete plans for its future.

But the episode last night (Monday, February 17) didn’t disappoint, with all of the old friends making fresh starts, of sorts, and grabbing whatever opportunities life threw at them.

Businessman-turned-homeless people’s champion David and his formerly frosty second wife Robyn grew closer than ever and even talked about marriage after a proposal celebration went wrong.

Meanwhile, Karen and Adam were torn between freedom on the open road, travelling Europe in a campervan or staying at home.

The couple had been hoping to drive off into the sunset, but Karen had noticed that Adam’s son Matt needed his father’s attention and support.

As if that wasn’t enough, Karen was then offered the job of a lifetime – but in London, not Manchester. How could she choose between her partner Adam, her home and her plans?

In the end, Adam made the decision for her… she could have her new job and him, when she was ready. And with that he headed off to enjoy travelling with his son!

Elsewhere, Pete and Jen were writing up their bucket list of things they felt they ought to do before they get old. But in one of the most romantic moments in the series, Pete revealed that he was happiest right there at home.

“I want to be on that sofa, watching TV with you, Jen Gifford,” he declared. “YOU’RE my bucket list!”

His sobbing wife replied: “Somewhere in this big, beautiful, hairy body beats the heart of a poet!” Awww.

Viewers loved how all the loose ends had been tied up for the Giffords, Williamses and Marsdens.

“We may be back, but not next year. Meanwhile, thanks for watching and hope you enjoy tonight’s farewell…”

Last night, James Nesbitt posted on Twitter that he was sad to hear the news that there will not be more of the show in the near future.

So sad to hear the news that there will be no more #ColdFeet for the foreseeable future after tonight’s final episode. Enjoy folks.

Co-star Ceallach Spellman, who has played Adam’s troubled son Matt for the past four years, posted a picture of all his castmates to mark the end of an era.

Tonight brings about the end of the #ColdFeet journey for now. What a joyous ride it’s been. All the love & appreciation to my Cold Feet family, not just these beauties you see here but all those behind the camera too, who’ve all made the series what it is over the last few years

He also sent a message to fans, saying: “Tonight brings about the end of the Cold Feet journey for now. What a joyous ride it’s been. All the love and appreciation to my Cold Feet family, not just these beauties you see here but all those behind the camera too, who’ve all made the series what it is over the last few years.

“I’m grateful for all the friends I’ve met and getting the chance to be part of such a special, unique show. That you for watching and joining us on this journey. I hope you’re enjoyed it as much as I did making it.”

Viewers are pretty gutted that the ‘perfect’ show might be rested for a very long time… perhaps even permanently.

Nooooo 😳😢 I’m all for finishing whilst on top form, but, there’s so much more… 🤔🤣 #ColdFeet https://t.co/rtA1qheLYg

#ColdFeet truly never disappoints. ❤️ the perfect balance of happiness, funny, family, friendship and sadness. I do truly hope it isn’t the last we see of the gang… but for now until next time.

This week’s @ColdFeetTV episode was like saying farewell to good friends. Because you love them you really do wish them every happiness but truly gutted that you might never see them again.
We’ll always have that song. #ColdFeet #TheFemaleoftheSpecies

Did you enjoy the final episode of Cold Feet? Leave us a comment on our Facebook page @EntertainmentDailyFix and let us know your thoughts.