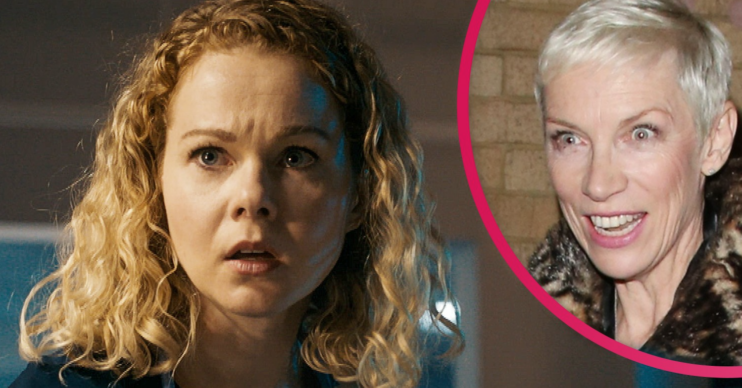 Chloe Godard in Holby City: How did Amy Lennox become famous and is she related to Annie Lennox?

The young actress is doing great work in Holby

Chloe Godard in Holby City has been at the heart of the Cameron storyline in recent weeks.

And in tonight’s episode, she’s reeling from the fall-out of Eli’s experimental stent trial and is still on edge because she knows Cameron is out there somewhere.

But who is Amy Lennox, the actress who plays Chloe? And is she related to Scottish pop legend, Annie?

The 33-year-old actress first hit the headlines when she appeared in Andrew Lloyd Webber’s The Sound Of Music musical in London in 2007.

In 2009 Amy was then understudy to Sheridan Smith in another West End musical, Legally Blonde, in 2009.

She then followed it up with a role in the touring production of 9 To 5.

And yet, Amy did not come from an acting family.

She showed promise as a youngster when she sang in nursery.

In an interview with The Express, she said: “Apparently my parents said I had perfect pitch and they cried when I sang.

“And because they went on and on about it, of course I decided, ‘Right, I’m not singing!’ Then I got to the age of 11 and I was watching a documentary about stage-school girls auditioning for Annie and it was like I got smacked in the face with envy.

She landed the role of Chloe after appearing in Casualty, and then a recurring role as the specialist registrar in cardiothoracic surgery in Holby.

We’re sorry to say that Amy is not related to 66-year-old Annie.

However, some fans automatically assume that Amy is part of Annie’s family.

In the same interview, she said: “At a stage door a few years ago, a woman just assumed I was Annie Lennox’s daughter.

“I can understand the confusion because we’re both from Aberdeen, but we are definitely not related and I’ve never met her.”

Amy was indeed born in Scotland, in Aberdeen more specifically.

And this would tally because she has a lovely, lilting Scottish accent in the show.

Of course, don’t forget that Chloe is the daughter of Ange Godard – played by Scottish actress Dawn Steele.

Is Amy married and does she have children?

Amy is currently in a relationship with fellow actor Tom Hargeaves.

She explained that the pair had postponed their wedding to this year.

Pictured in swimming and surfing gear wearing a wedding veil, she said: “We do….not ..(yet..) #2021wedding #postponedwedding @hargreaves_t27.”

We’re waiting for news of the big day!