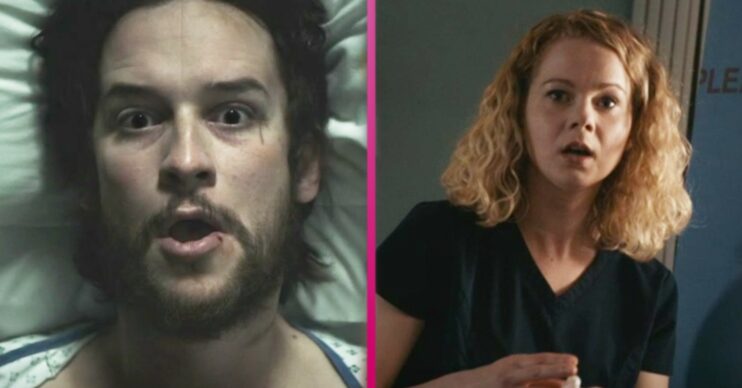 Holby City spoilers reveal that it isn’t over with Cameron Dunn in upcoming episodes.

Cameron was arrested back in March after his crimes were finally revealed.

Recently Chloe was horrified that Cameron was coming back to Holby.

In his bed at the hospital, Cameron grabbed Chloe and said: “You did this to me.”

Later, Cameron was injected with a substance which was later revealed to be potassium.

His heart soon appeared to stop and as he had a do not resuscitate order, they were unable to resuscitate.

Eli called the time of death, however soon a major accident was called into the hospital and Cameron’s body was taken away.

Soon Chloe suspected something was wrong and when she found the potassium in the bin and eye drops.

As Chloe, Age and Eli went down to the basement they found Cameron’s empty bed.

She realised he slowed his heart down using the potassium and diluted his eyes using the drops to appear dead.

Then when the major accident was called in, he escaped.

In the trailer, he can be seen escaping on CCTV.

He then appears to be in the hospital basement and it seems as if he’s going after Hanssen with a hammer.

Meanwhile Hanssen says: “The world has underestimated you, Dr Dunn. This isn’t going to be easy for us, I know that.”

Meanwhile Chloe and Ange are preparing to perform surgery as Cameron can be heard saying: “You never thought I was good enough, did you? I’ll show you how wrong you were.”

They both look horrified as they realise Cameron is in theatre with the patient.

Is he going to kill again?

Holby City continues next week (August 30) on BBC One.