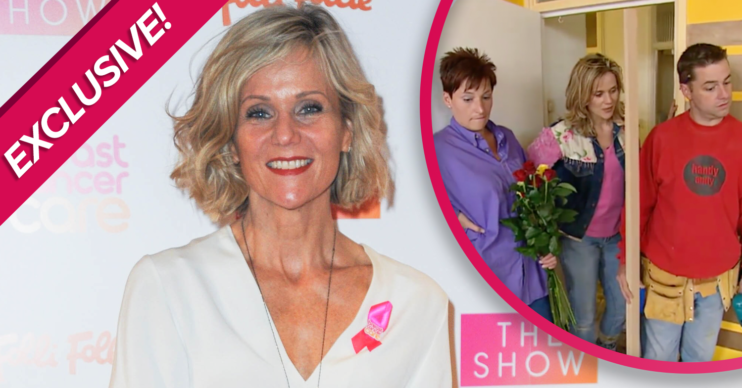 Changing Rooms reboot: Linda Barker ‘wasn’t asked’ to take part and doesn’t think they can ‘repeat what we had’

She said it's 'just one of those things'

Home improvement show Changing Rooms is getting a reboot but only one of the show’s original stars will appear in the series.

Laurence Llewelyn-Bowen will return to co-host the show – which has moved from the BBC to Channel 4 – alongside Davina McCall.

However, interior designer Linda Barker, who starred in the original incarnation, has exclusively revealed she “wasn’t asked” to take part.

Linda also revealed she isn’t sure the team will be able to “repeat” the magic of the original series.

What did Linda say about the Changing Rooms reboot?

However, while Laurence has admitted producers had to “coax” him back, Linda reveals she wasn’t asked.

That won’t stop her watching though.

“In lockdown lots of people are talking about renovations and you look at the TV and there’s not that much in terms of interior design and I think it’s very timely and I think it’s rather brilliant,” she said.

So why isn’t she taking part?

Asked if she’s sad not to be involved, Linda revealed: “I don’t know. I think it’s nice that it’s coming back. I don’t think you could repeat exactly what we had. It’s just one of those things really.

“Yes, of course I’ll still watch. It’ll be really good. I have such fond memories of that show. It was the turning point in my career. It’s been wonderful for me.”

Her relationship with Laurence Llewelyn-Bowen

Far from having hard feelings with Laurence, Linda said they enjoyed a reunion recently.

I think it’s nice that it’s coming back. I don’t think you could repeat exactly what we had. It’s just one of those things really.

“We see each other from time to time,” she revealed. “I’ll see them all [her old co-stars] at industry events and we had a reunion not so long ago and that was really nice.”

However, with Linda not on hand to keep flamboyant Laurence in check, she thinks it’ll be an “interesting” watch.

She laughed: “I’m sure it’ll be very interesting to watch.”

It’s a wonder Linda has any time for TV given that she’s super busy with her own projects.

She’s in the middle of a huge house renovation and launched her own paint range during the first Government lockdown.

She’s now teamed up with blinds specialist Terrys on the launch of its new ViSULiZR app.

Perfect for lockdown when the shops are closed, it also serves to eliminate costly mistakes when it comes to picturing what your blinds will look like once they’re up indoors.

Linda explained: “It’s quite innovative and takes all the guesswork out of buying those expensive items like blinds.

“It’s clever in the fact that it helps you imagine pretty much what your blind’s going to look like when it comes through.

“You hold your phone screen up to your window and the fabric is calibrated to how it’ll look when it arrives,” she added.

Next on the agenda for Linda is her 60th birthday, which she’ll celebrate in October 2021.

“I’m not even thinking about it,” she said.

“I shall be climbing a mountain somewhere I think or doing something really exciting if we can travel. I’ve got no option but to celebrate that.

“I’ll definitely be dancing on tables and growing old disgracefully and doing a headstand at the same time,” she laughed.

For more on Linda’s work with Terrys and the ViSULiZR app, visit the website here.