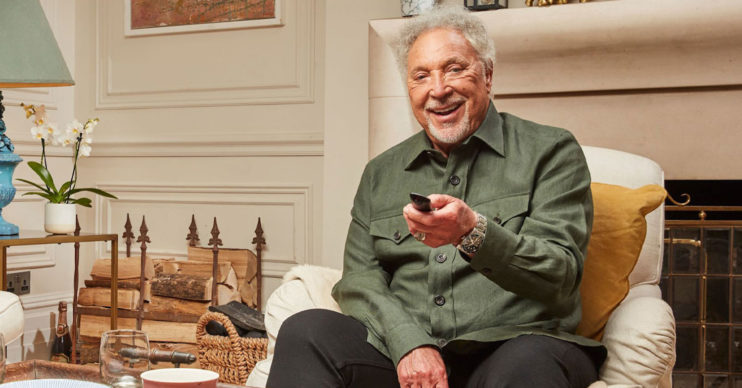 The legendary singer teamed up with The Voice co-star Anne-Marie for a sweet sit down to watch the week’s telly.

One said: “Tom Jones is an awesome edition to the Gogglebox gang.”

Another added: “Having Tom Jones on #CelebrityGogglebox is a touch of genius.”

However, it was his phone that caught people’s eye.

Despite being a multi-millionaire many times over, Sir Tom has an old flip phone. And he can barely use it to text.

“I can read – no problem, but I’m no good at spelling. I’ll have to read it and you write it.”

Viewers couldn’t believe it with one tweeting: “Tom Jones having a flip phone is incredible #CelebrityGogglebox #Gogglebox.”

And there was a more emotional moment when the the two singers watched an episode of Supervet.

Tom became emotional as the vet’s own dog Keira desperately needed an operation to save her life.

“Oh, she’s bound to pull through,” Tom told Anne Marie. “You can’t have a dog dying on the television.”

However, the rest of the episode detailed how vet Neil could save Keira the dog’s life.

Keira’s story as seen on The #Supervet will be shared with the @C4Gogglebox celebs this evening on @Channel4 – tissues at the ready…! X pic.twitter.com/6jlXN48SzH

Neil had to decide whether he would be performing the surgery on his own dog – and fortunately he opted to.

Read more: Celebrity Gogglebox cast: Mel C and brother Paul – do they have any other siblings?

“If this dog can walk again, it will be unbelievable,” Anne Marie said.

However, it had a happy ending and Tom was proved right.

Keira is happily walking at the end of the episode.