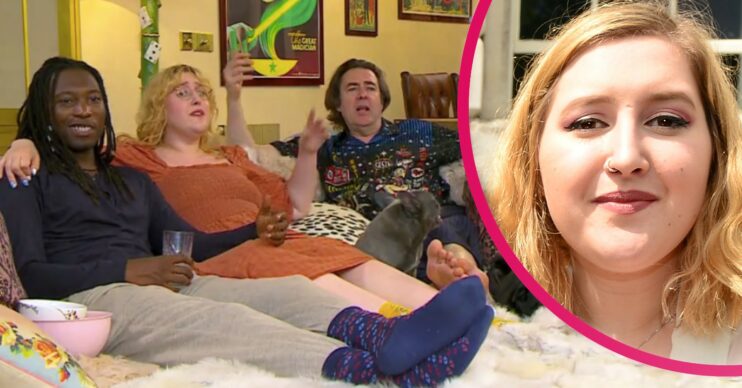 We don't think she'll care though!

The model and fat activist, 24, made her debut on the popular Channel 4 show alongside her famous dad Jonathan Ross, her boyfriend Zane Saz and her brother Harvey.

Although the family appeared to get on famously, some viewers were left distracted by Honey’s dress.

As she snuggled up to Zane on her family’s gigantic couch, she narrowly missed exposing her underwear.

What are viewers saying about Honey?

One viewer tweeted: “#HoneyRoss needs to keep her legs closed on #CelebrityGogglebox.”

While another viewer argued: “I just wish his daughter would keep her legs down. I don’t want to see next week’s washing!”

Yet another user commented: “#CelebrityGogglebox I kept worrying we were about to see Jonathan Ross’s daughter’s knickers – or worse. You think he’d advise on camera angles, wouldn’t you?”

However, many viewers also commented on how much they enjoyed having Honey and her family on the show.

O others were seemingly perplexed by Ross’ massive yet seemingly ground level sofa.

Several mocked its appearance – while others were left impressed.

One user teased: “Watching #CelebrityGogglebox but so sorry to see that Jonathan Ross has fallen on hard times and had to sell his furniture.

“Keep fighting Jonathan we are with you. #Gogglebox.”

Another user asked: “Why does Jonathan Ross look like he’s living in a commune? #CelebrityGogglebox.”

Who is Honey Ross?

So just who is Jonathan Ross’ daughter Honey?

She is a fat activist and supports body positivity. She also describes herself as a writer and podcaster.

After years of struggling to accept her weight and unhealthy diets – she now accepts her natural beauty.

Speaking to The Sun, she declared: “Because I’ve got a gut, apparently that’s a big deal. I am really attractive. I’m an attractive young woman who wants to enjoy my life and my body in the same way that my thin friends have always been allowed to.”

What’s more, she regularly posts revealing and celebratory posts about her body on Instagram.

Back in May she even posed completely naked with screenwriter and actress Lena Dunham.

Here the caption was a lengthy tribute to Lena, which included: “She is, and will always be, a woman who holds an incredibly special place in my heart.

“We also both have identical bodies and the same specific kind of arthritis so if that ain’t special, I don’t know what is.”