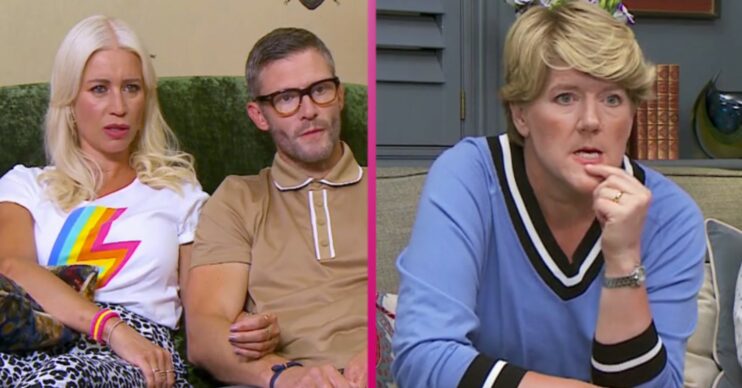 Celebrity Gogglebox 2021: The full cast of the showbiz version on Channel 4

This year, there have been some new faces alongside regulars like Shaun Ryder, Mo Gilligan and Martin Kemp…

Here’s a run down of our favourite families, couples and friends who are taking part!

The Essex couple were a big hit with viewers in previous series as a result of their tongue-in-cheek comments and sometimes brutal honesty.

Although Denise, 47, and Eddie, 46, haven’t yet tied the knot, they are planning to wed any day now.

Eddie is a commodities trader from Essex who specialises in the oil business.

Denise and Eddie met back in July 2014 after they were introduced by a mutual friend.

Eddie is Denise’s first boyfriend after her 2013 split from husband Lee Mead, who’s the father of her daughter Betsy.

Alice is also a broadcaster and journalist.

The two entered into a civil partnership in 2006, and in 2015 officially married in a private ceremony.

Radio and TV broadcaster Jeremy Vine is an unlikely pairing with Snoochie Shy.

Londoner Snoochie is an actress and presenter who has possibly gone down in history for getting Jeremy to twerk on TV.

How do they know each other? We wish we knew!

If we were allowed favourites, then it would be Happy Mondays bandmates Shaun Ryder and Bez.

Bez – real name Mark Berry – recently won over TV audiences (again) during his time on Celebrity MasterChef, when he was shambolically brilliant.

Shaun Ryder was the lead singer of the band Happy Mondays, and in 1993 he and former Happy Mondays dancer Bez formed Black Grape.

Shaun has appeared in a number of TV shows including the BBC3 documentary Shaun Ryder: The Ecstasy and the Agony and I’m a Celebrity… Get Me Out of Here!

Comedian and The Masked Singer judge Mo Gilligan appears on the show alongside his pal Babatunde.

Babatunde Aleshe is a 34-year-old actor, writer and comedian.

His acting career has included an appearance in Doctor Who back in 2010, as well as Eastenders in 2011 when he played a nurse who had to start Tanya Jessop (Jo Joyner) on her chemotherapy treatment.

The pair are good friends, and match each other for their sharp witticisms.

Maureen has appeared in films such as The Pianist and Educating Rita.

Ahead of the show starting, she expressed nerves about taking part but excitement about the free crisps the celebs are provided with!

She said: “Rosie and I have been asked to do it and we love the show so much so we thought let’s just do it.”

They made their debut during the third series.

Micah Richards previously played as a right back and played in the Premier League and English Football League for Manchester City and Aston Villa.

Nick Grimshaw and his niece Liv

The Manchester-born 37-year-old is back filming from his sofa, with his niece Liv.

Nick Grimshaw, also known as Grimmy, is an English TV and radio presenter.

He is best known for hosting The Radio 1 Breakfast Show, taking over from Chris Moyles in 2012.

Liv is an assistant in merchandise for the online fashion brand PrettyLittleThing, according to reports.

Perhaps best known for their presenting work together on the ITV daytime programme This Morning, the duo have presented the show together since 2006.

Today, they currently co-host This Morning during school holidays when Philip Schofield and Holly Willoughby are absent.

Clara Amfo and her brother Andy

Clara Amfo is a Radio One DJ, who presents the mid-morning show after taking over from Fearne Cotton in 2015.

She took part in the 18th season of Strictly Come Dancing and was partnered with Aljaž Škorjanec.

Amfo appears on Celebrity Gogglebox with her brother, Andy, a DJ and producer.

Celebrity Gogglebox 2021 cast – who else is taking part?

Others taking part include Wretch 32 and Ghetts, Jourdan Dunn and brother Antoine, Eddie Kadi and Michael Dapaah, and Ashley Banjo and his brothers Jordan and Perri Kiely.

Former Spice Girl Mel C also appears alongside her brother Paul, as does Martine McCutcheon and her man Jack McManus, and Chris Eubank and his son Chris Eubank Jr.