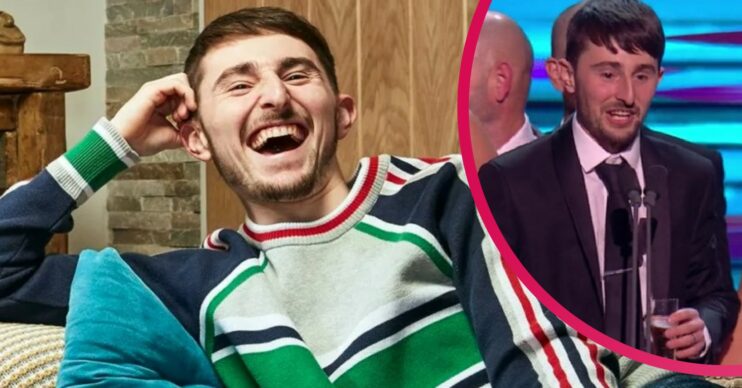 The reality star has A LOT to celebrate

The reality star – who appears on the Channel 4 show alongside sister Sophie – confirmed the news at the NTAs on Thursday (September 9).

On the red carpet, Pete admitted that he couldn’t be happier with his new wife and baby.

Speaking about their wedding, he told OK!: “I’m married now! It was nerve-wracking but the best day of my life. Well second best day as I’m a dad now, too.

In addition, Pete also opened up on becoming a dad for the first time.

He told The Mirror: “It’s a bit overwhelming, got it all going on at the moment!”

Revealing the sex of his first child, the TV star added: “He’s cool little lad, takes after his mum not me!

“I’ve been up all night, I slept on the train here – got suitcases under my eyes.”

The star announced his baby joy on Gogglebox

Pete, 26, previously announced the couple’s baby news back in April.

At the time, he made shared the news on an episode of Gogglebox.

Discussing his excitement, he told sister Sophie she was going to be an aunt.

Showing his phone to Sophie, he said: “Here we go, look at this! Isn’t it mad? I am actually going to be a dad to somebody.”

His younger sister added: “Crazy. Life’s coming at you fast.”

After the news had been revealed, Pete then took to Instagram to reveal their first baby scan.

Read more: Gogglebox stars defended as viewers accuse them of being ‘drunk’ during NTAs speech

In the snap, the star edited a picture of his head into the middle of the scan.

Pete is yet to post about his baby son’s birth on social media.

Paige has been an emergency service call handler for over three years.

According to her social media pages, Paige graduated from Queen Mary University of London in 2019 with a degree in English language and linguistics.

The Gogglebox star first went public with their romance in October last year.

At the time, he posted a loved up selfie on his Instagram profile.

Meanwhile, back in February, Pete revealed that he had popped the question to Paige.

On Gogglebox, he shared: “I feel like an even bigger responsibility. I don’t know why. I’m going to have a wife.”