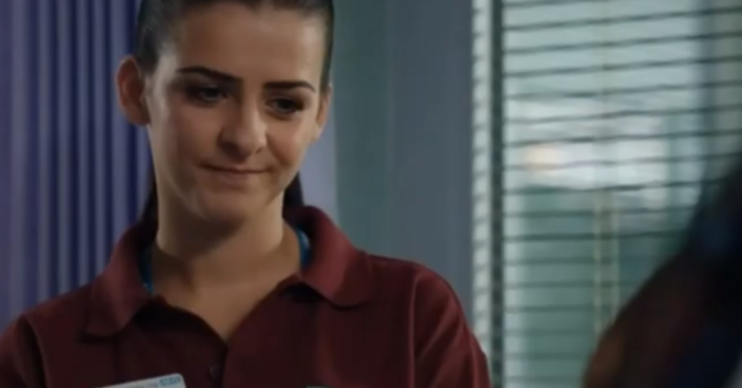 Casualty star Rebecca Ryan has suggested a return to the show for her character Gemma Dean is possible.

The actress hosted a Q&A on Instagram and teased that it’s never off the cards that she might pop up in the medical drama again.

Gem left in August 2019 after decided to swap working in the ED for a life abroad.

Although the show has no current plans to bring her back, actress Rebecca has stated she is up for it.

“I absolutely loved working on Casualty. I’d love to go back. Who knows, you never know. Gem’s not dead yet,” she told her followers.

As well as a return to the drama, she also expressed an interest in two reality TV faves.

“I love Strictly,” she said. “It’s like my all-time favourite and I’d love to learn all the dances and wear all the costumes and the make-up.

“And yeah. I’d be quite intrigued to do the jungle.”

Could we see her lining up on this year’s Strictly Come Dancing or I’m A Celeb…Get Me Out Of Here!?

Who was Gemma Dean in Casualty?

Gemma ‘Gem’ Dean was the sister of paramedic Iain Dean.

She worked at the hospital as a porter and began a romance with F1 doctor Rash Masum.

Gem was always supposed to leave and meet up with Rash on his travels, but stuck around after Iain struggled with his mental health.

However, Iain soon urged her to put herself first for once and even paid for her ticket to Thailand to join Rash.

Where else have you seen Rebecca Ryan?

Rebecca has had roles in Shameless and Emmerdale.

She played Bob Hope’s daughter, Carly, before Gemma Atkinson took over the role.

Most recently she had a part in an episode of Doctors on BBC1.

Rebecca also admitted during the Q&A she’d like a part in Coronation Street.

She wouldn’t be the first actress to crossover to the cobbles as former Casualty actress Jane Hazlegrove recently came back to Corrie as Bernie Winter.