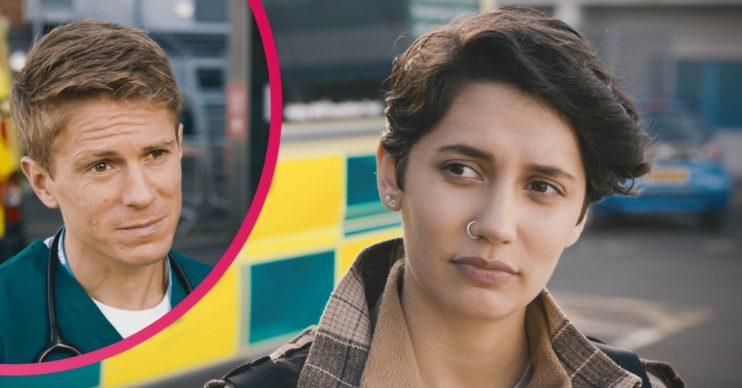 Casualty spoilers reveal Fenisha is haunted by disturbing visions of her son Bohdi.

A few weeks ago Fenisha gave birth to her son and Ethan’s son Bohdi. However she has been struggling with motherhood and in tonight’s episode (Saturday, March 13) she reaches out for help.

In tonight’s episode of the BBC medical drama Fenisha is back in the hospital with little Bohdi. However she is consumed with fear that something is going to happen to her baby.

Read more: EastEnders: What is would really cost to live on Albert Square

After visualising a car hitting his car seat, a shaken Fenisha ties her scarf to her wrist and Bohdi’s pram, hoping this will protect him and keep him safe.

But as Fenisha heads off she has another disturbing vision of her baby boy falling off the table.

Meanwhile Robyn wants to help her friend and reaches out to Fenisha asking her how she is getting on with motherhood.

But Fenisha opens up to her and admits she keeps seeing awful things happening to Bohdi and isn’t sure what to do about it.

Robyn calmly tries to ease Fenisha’s fears but urges her to talk to Ethan about what’s going on.

But Fenisha is torn over whether she should tell Ethan about her fears. Robyn soon steps in and takes matters into her own hands but going to speak to Ethan herself.

After chatting to Robyn, Ethan follows Fenisha out of the hospital and encourages her to be honest with him.

Read more: The Syndicate on BBC One: When is series four and who is in it?

He soon realises just how much she is struggling and Ethan offers for her and Bohdi to live with him so he can support them.

She agrees and leaves the hospital feeling confident. But are her worries really behind?

The next episode of Casualty airs Saturday March 12 at 8.20pm on BBC One.

Have you been watching Casualty? Will you be watching tonight? Leave us a comment on our Facebook page @EntertainmentDailyFix and let us know what you think!