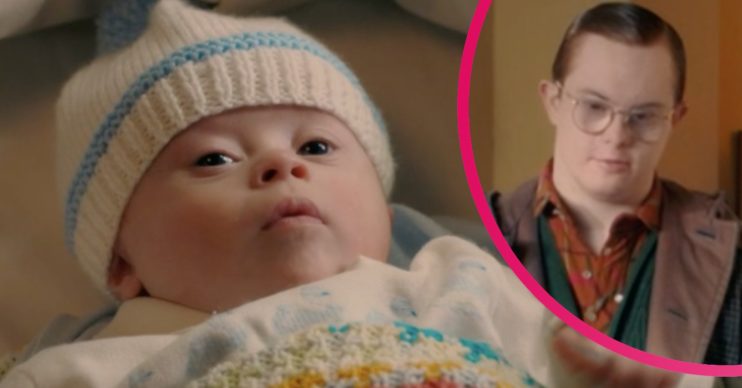 Call The Midwife season 10: Down Syndrome storyline leaves viewers in tears of gratitude

We were crying too!

The Call The Midwife season 10 finale left viewers in floods of tears over a heartbreaking storyline about Down Syndrome.

The episode followed mother Blanche Dellow, who was ready to give her baby to her infertile sister, Sylvia.

However, when Blanche, who had several older children, gave birth, her son was diagnosed with Down Syndrome.

Sylvia called the adoption off but Blanche fell in love with her baby and decided to keep him.

What did Doctor Turner say?

The episode covered the topic sensitively, with Doctor Turner insisting that the baby’s condition be referred to as Down Syndrome – instead of the ill-educated slurs often used in the 60s.

Reggie Jackson, who also has Down Syndrome, came to visit the baby once at home.

Thrilled to meet him he said: “Awww, I like his face.”

And he then took the baby out for a walk, pushing his pram.

Many said they were in tears – but these were ultimately tears of joy over the happy ending.

One viewer tweeted: “I am crying looking at Twitter for #CallTheMidwife. All the people giving thanks for the positive Down Syndrome storyline. It’s why stories that are on tv should represent as many different people as possible. It matters.”

Another viewer commented: “#CalltheMidwife A heart rending episode to end the tenth series. Down Syndrome children are the most gifted and loving children I have come across in my life in London and Lancashire.”

A third viewer shared: “Totally broken by 2 hrs of #CallTheMidwife. That series finale was wonderful and I love Reggie.”

A fourth viewer revealed: “#CallTheMidwife I am destroyed. Reggie pushing the pram broke me. Congratulations to everyone involved in the show. It just goes from strength to strength.”

A beautiful performance by Nate, a fantastic little actor! Tonight’s episode of @CallTheMidwife1 was very special and emotional to me. I hope you found it as heart warming as I did. pic.twitter.com/BtbQx1s7pW

Whereas a fifth user expressed: “I’m crying now. Reggie gets to push a pram. That wee baby gets his silver cup #CallTheMidwife.”

Actor Daniel Laurie said the episode was ‘very special’ to him

Actor Daniel Laurie, who plays Reggie, tweeted: “A beautiful performance by Nate, a fantastic little actor! Tonight’s episode of @CallTheMidwife1 was very special and emotional to me. I hope you found it as heartwarming as I did.”

And director Thomas Hescott tweeted: “So lovely to see all the wonderful #CallTheMidwife messages for last night’s episode. I was so proud to be involved with telling a positive story about Down Syndrome, and it’s good to see so many people have responded to it with love.”

Will there be a series 11 of Call The Midwife?

Although series ten of Call The Midwife just wrapped – the show hasn’t ended.

In fact, far from it. There will be a series 11 of Call The Midwife.

And the BBC has confirmed that the show will run until at least 2024.

Series 11 doesn’t have an official launch date so far.

However, he predict it will begin airing in January 2022, after the traditional Christmas special.