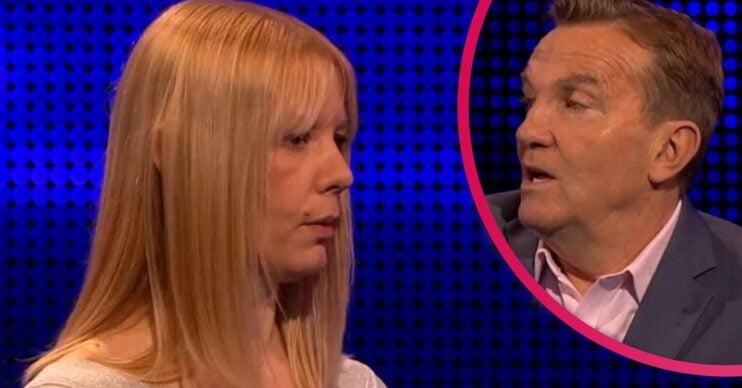 Bradley Walsh shocked as The Chase contestant takes MINUS £11k

Bradley Walsh was left speechless during the latest episode of The Chase.

Contestant Jo from Ripon was the fourth to take to the podium on last night’s show.

Two had managed to make it through so far, and they’d built up a cash prize of £29,000 between them.

However, when Jo was called up for her turn that quickly changed.

She went against Jenny ‘The Vixen’ Ryan, and many viewers were convinced the team could end up going all the way.

However, that quickly changed when Jo only managed to secure £2,000 to add to the pot.

As a result, she decided to look after herself and ensure a place in the next round.

Her decision to take the minus £11,000 offer left host Bradley speechless as he just whistled in response.

Viewers felt the same, with many running to Twitter to hit back.

“I am [bleep] rattled after that episode,” said one viewer. “Will take the -£11k to get back then contribute one answer in the final which my dog could’ve got right. These people live amongst us. #TheChase.”

“You just wouldn’t, would you? And as much as I love Jenny, no amount of ‘The low amount is never an insult’ can stop me thinking robbing £11k isn’t.. #TheChase.”

However, others defended Jo against criticism as one said: “Take no notice Jo, you did the right thing!”

Another wrote: “Love Jo on #TheChase. It’s a game at the end of the day and she played it safe for a huge reward.”