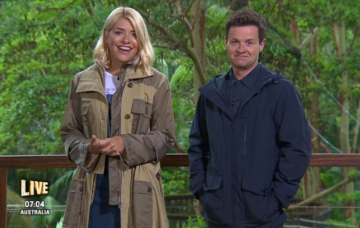 Will she be returning next year?

Holly Willoughby was a huge hit with viewers when she stepped into Ant McPartlin’s presenting role on I’m A Celebrity… Get Me Out Of Here!.

And now she’s the bookie’s favourite to return to the jungle next year alongside Dec Donnelly.

Despite a shaky start, the 37-year-old presenter is being backed to host with Dec when the reality show returns next year – even if Ant is available to make his comeback.

Betway’s Alan Alger said: “Holly slotted in to I’m A Celeb presenting duties seamlessly and did a fine job alongside Dec for this year’s series.

“The newly formed duo are our even money favourites to present the show in 2019, with Dec’s regular on-screen partner Ant 7/4 to make it a three-way line-up.”

However, the Geordie duo are also competitively priced to return.

Alan explains: “Ant and Dec have presented the show since its inception in 2002 and they are 5/1 to resume their partnership ahead of the 19th series of the show without Holly.”

An average of 10.9 million viewers tuned in to watch football boss Harry Redknapp crowned the King of the Jungle on Sunday night, according to overnight ratings data.

And fans were full of praise for Holly, with one fan tweeting: “Is it wrong that I don’t want ant back next year @hollywills has been brilliant.”

It has already been revealed that the presenter, who paid herself a whopping £1.7 million last year, will not be returning the This Morning until 2019, so she can take a well-deserved break following her jungle stint.

Read more: Harry Redknapp finally gets his lips around a jam roly-poly and viewers are ecstatic

When asked if she would be back before Christmas her TV husband Phillip Schofield revealed on Twitter: “Nope, she can’t get back in time.

“The first time we’re on telly together is @dancingonice in the new year.”

Do you want Ant to return to I’m A Celebrity? Leave us a comment on our Facebook page @EntertainmentDailyFix and let us know what you think!