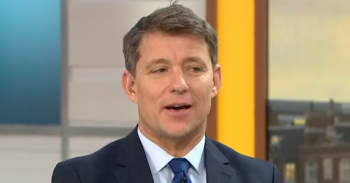 Clearly a slip of the tongue, but still...

Appearing on today’s show alongside former Liberty X singer Michelle Heaton, Susannah was discussing the calming effects of sleeping next to your partner.

The debate was in response to a survey that found one in four couples sleep in separate rooms at home, while half of sleep disturbance comes from sharing a bed with your loved one.

Read more: Susanna Reid ‘ups security in her home after TWO burglaries in a month’

Susannah explained that she and her husband Joseph often sleep in separate beds because he wriggles too much, adding: “It’s very important, well it was for us, for our children when they were young to see us going to bed and sleeping together and having the united family unit.”

But she concluded: “Now they’re older, and they understand, I’m like ‘Oh [bleep] sake’. Excuse my language.”

She attempted to cover it up by adding “Flip, flip!” but what she actually said was clear.

Ben, who grinned awkwardly after the gaffe, was forced to apologise,

He lightly scolded Susannah by telling her it was the wrong time of the morning for that sort of language and joking that it may have been down to a lack of sleep.

Susannah rose to fame in the early 2000s with her fashion programme What Not to Wear, co-hosted with pal Trinny Woodall.

She was among the celeb lineup in last year’s series of Strictly Come Dancing, during which she managed to land the show’s worst ever mark for a samba performance alongside pro partner Anton du Beke.

Some viewers took to Twitter to laugh at her GMB F-bomb.

Another tweeted: “Have to feel for Susannah Constantine’s agent… spent months trying to get her a three minute segment on breakfast telly and she goes and drops an F-bomb.”

It follows an interview on GMB yesterday that left viewers furious.

Ben and co-host Kate Garraway were speaking to parents about LGBTQ+ issues and whether or not they should be taught in school.

One of the guests, gay dad-of-one Tom Cox, said he believes banning lessons on the issues will make children “ignorant”, but Christian mum Izzy Montague said it should be up to the parents and went on to call being gay “a choice”.

Do you think Susannah should have been more careful in her interview this morning? Leave us a comment on our Facebook page @EntertainmentDailyFix and let us know what you think!