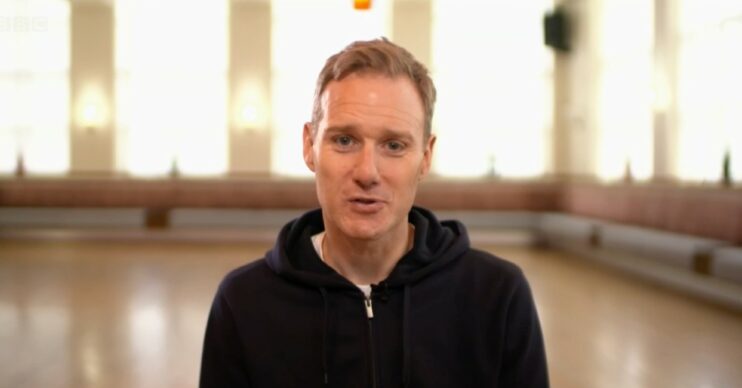 Dan's been on the red sofa for almost six years now

The 45-year-old, who has been on Breakfast since 2016, admitted to fans that he’s “sad too” following the news.

🚨 Some news to share with you all from us at @5_News 🚨@mrdanwalker will be bringing you the news at 5pm every day from now on.

And he’s got something to tell you all – watch his video down below ⬇️ pic.twitter.com/nMKrG2Wmfw

Earlier today, Dan delivered some heartbreaking news to fans and viewers of BBC Breakfast – that he’s leaving and joining Channel 5.

He will be fronting the broadcaster’s news bulletin, 5 News, as well as a number of other programmes.

In a short video, Dan says: “I have a little bit of news for you. In the next few weeks, I’m going to be leaving BBC Breakfast and moving to 5 News and to Channel 5.”

“I’m really excited. But this has also been a massive decision for me because I love Breakfast,” he continued. He then went on to say that he loves working alongside Sally Nugent and the team.

“But Channel 5 came with big ambitions, with big plans. And I don’t think opportunities like this come around very often,” he said.

Plenty of Dan’s followers took to Twitter to congratulate the 45-year-old on his latest career move.

However, plenty were disappointed that he’s called time on BBC Breakfast, and were keen for him to know that.

“Congratulations but really sorry to see you leave BBC Breakfast,” one follower said.

Georgie Heath, a sports journalist for the BBC said: “This feels like a break-up. @Mrdanwalker has been a constant and a sense of normality on my screen through a lot of ups, downs and everything in between.”

“I’d only just got over @louiseminchin and now this @BBCBreakfast,” she added.

“You’ll be okay Georgie. Thanks for watching,” Dan replied.

Another fan said: “I’m so disappointed to hear this. I enjoy watching you and Sal on BBC breakfast early every morning.”

Dan told them: “Thanks for watching Sarah.”

Another person tweeted: “Gutted to hear you’re leaving BBC Breakfast as love seeing you and Sally together,” to which Dan replied thanking the viewer.

What else did Dan say about joining Channel 5?

Earlier this afternoon, following the news that he would be moving to Channel 5, Dan uploaded a video of his own to Twitter.

“Thank you for all your kind comments. Big decision for me to leave Breakfast but I’m really excited to join 5 News & Channel 5,” Dan tweeted.

“It’s been a privilege to work with some amazing people at Breakfast and I’ve had such a happy 6 years there,” he continued.

Read more: BBC Breakfast presenters praised by fans as Dan Walker is replaced by a ‘much better’ host

In the video, Dan explained his decision for moving and expressed hope that this wouldn’t be the end of his association with the BBC.

“Hopefully it’s [the move] not goodbye to the BBC. I’ve had the privilege of working with some incredible people on iconic programmes,” he said. Dan then listed some, including his coverage of the Olympics and World Cups.

“Hopefully, this won’t close the door on that,” he added.