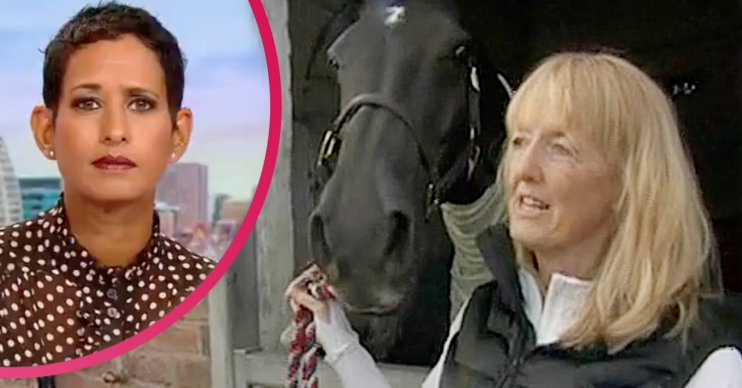 Viewers spat out their cornflakes!

On BBC Breakfast today, viewers were in hysterics (Friday August 13) when a guest revealed an x-rated nickname for her horse.

And it wasn’t long before viewers cracked up over their cornflakes over the hilarious name.

Hosts Charlie Stayt and Naga Munchetty introduced a discussion about horse fly bites and how to avoid them.

They then went to a horse stables in the Wirral, where the reporter Jane McCubbin interviewed two horse trainers.

“This is Vag, you’ll hear from her soon,” Jane said, pointing to one horse.

She then interview owner Helen, who explained that the horse’s name was Vira but is known as Vag.

And poor Vag was a poorly horse.

Vag was bitten by horse flies and reacted badly, even collapsing.

How did Charlie and Naga react to the horse’s name?

“I’m calm now, but I thought it was the end,” Helen explained.

“She couldn’t breathe, she couldn’t swallow. She was covered in hives.”

The vet who treated the hives on Vag then explained what he did to help her recover.

Then it was back to the studio, and Charlie and Naga chose to stay quiet about the nickname.

The viewers, however, did not.

Vag is a bit of an unfortunate nickname !#BBCBreakfast

A stable has managed to get #BBCBreakfast to say "vag" on TV. Brilliant.

What did viewers say about Vag?

Viewers soon took to Twitter to register their shock but also hilarity at the nickname.

A second wrote: “Vag is a bit of an unfortunate nickname!”

Another said: “Why is that horse called Vag and why is its name being repeated over and over [cry-laugh emoji] #BBCBreakfast.”

A third wrote: “A Stable has managed to get #BBCBreakfast to say ‘vag’ on TV. Brilliant.”