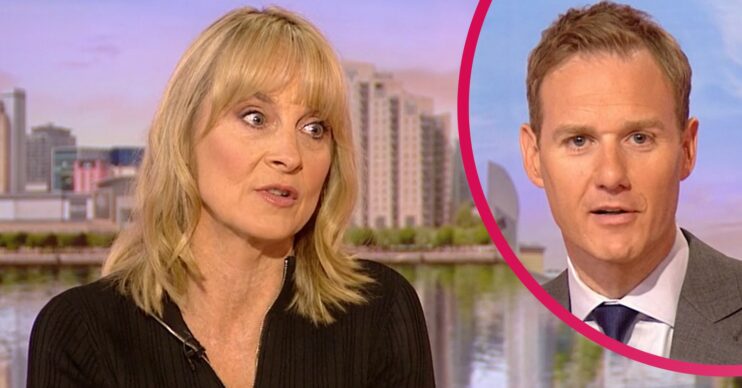 BBC Breakfast welcomes Louise Minchin back for desperate cause

Louise returned to the red sofa on Wednesday!

Louise Minchin made a welcome return to BBC Breakfast this morning to talk about an important issue.

The mum-of-two, 53, popped up on the sofa to discuss the national shortage of Hormone Replacement Therapy (HRT).

What a treat to have @louiseminchin back on the #BBCBreakfast sofa.

What do you think about the new line up? @sallynugent
😂😂 pic.twitter.com/gVrhNh9WVU

Louise announced her return to the show on social media, telling her fans: “Good morning, I am on my way to @BBCBreakfast to talk about the #HRTshortages, have you had issues getting supplies and how does that make you feel??”

In 2019, the presenter hosted the Wake Up To Menopause campaign after revealing that she suffered hot flushes while presenting live TV.

Read more: Louise Minchin: What happened to her stalker? Is he in prison?

Louise explained that the shortage of HRT has left many women suffering from mental and physical side effects.

Explaining how she felt when she was going through the menopause, Louise said: “Because I wasn’t on HRT at the time, and actually I look back at the film that I did and I kind of feel sorry for that Louise.

“It looks to me like a different person because I was so anxious, I was so shaken up.”

Sally Nugent bagged the coveted role and was delighted to see Louise today.

Dan also looked pleased to see his former colleague and joked about her coming back to the show.

The Strictly Come Dancing star quit BBC Breakfast recently and will be moving to Channel 5 News.

Teasing Louise about his move, he said: “There might be a vacancy in a little bit if you fancy it?”

But Louise turned down the invitation, saying: “I love working with Sally. It’s the hours. Already getting up for 6am this morning was trying enough, but thanks Dan.”

Realising his pal had made up her mind, Dan said: “It’s great to have you back.”

Dan tweeted a pic of him, Louise and Sally on he sofa telling fans it was a “treat” to have Louise back.

He also shared a video of his colleague and jokingly asked if she still had her BBC pass.

Fans loved the posts and tweeted their support for the much-loved presenter.

As she enjoys her lie-ins again triathlete Louise has announced she will be bringing out a book in 2023.

Is is said to have a sporting theme after the success of her first offering: Dare to Tri: My Journey from the BBC Breakfast Sofa to GB Team Triathlete.