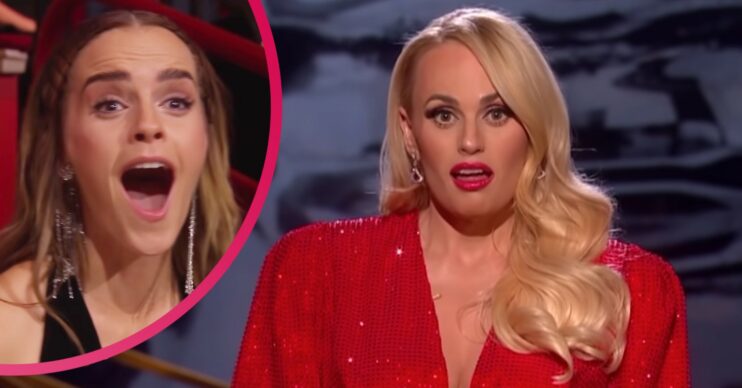 BAFTA 2022: Viewers’ plea to BBC after ‘cringe-worthy’ and ‘embarrassing’ ceremony

Returning after a two-year delay, the comedian took over hosting duties previously taken on by Graham Norton in 2020.

However, some viewers were far from impressed with the comedy star BAFTA turn.

As she opened the BBC awards ceremony, Rebel referred to her incredible weight loss transformation.

Showing a picture of herself from a previous BAFTA event, she said: “I might look a bit different from the last time you guys saw me here.

“That was two years ago and I’ve undergone a big transformation. I hope JK Rowling still approves.”

During the ceremony, Rebel said: “So I was going to do a musical number as host, it was about Prince Andrew though. Um, no guys, it’s no, it’s not what you think.

“It was on roller skates, it’s called Pizza Express. But don’t worry, I’m not gonna do it, I’m not gonna sing. I’m saving my voice for the sequel to Cats.”

Elsewhere, Dune won five out of its eleven nominations while The Power Of The Dog bagged two.

Meanwhile, Joanna Scanlan won the Leading Actress gong for her role in After Love.

Will Smith won the Leading Actor award for his performance in King Richard.

How did BAFTA viewers respond?

However, Rebel failed to impress some viewers as they called for Ricky Gervais to host the ceremony.

Taking to Twitter, one said: “Rebel Wilson trying a bit too hard to be Ricky Gervais here? #Awkward #Baftas #BAFTA2022.”

Another added: “#BAFTA2022 Ricky Gervais should have hosted. Rebel was lame as all hell. Not funny.”

A third wrote: “Rebel Wilson hosting the BAFTA’s is painful to watch. We need a Batman signal in the air for @rickygervais for moments like this.”

#BAFTA2022 Ricky Gervais should have hosted. Rebel was lame as all hell. Not funny.

Rebel Wilson hosting the BAFTA's is painful to watch. We need a Batman signal in the air for @rickygervais for moments like this.

We made it 15 minutes into #BAFTA2022. The level of cringe is through the roof? Couldn’t do it.

Rebel Wilson wasn’t kidding when she said she might kill the #BAFTA2022
It’s embarrassing to watch.

Can safely say she won’t be getting this gig again next year… who thought this was a good idea? #BAFTA2022

A fourth shared: “We made it 15 minutes into #BAFTA2022. The level of cringe is through the roof? Couldn’t do it.”

Another complained: “OMG where’s @rickygervais when you need him @BAFTA.”

“Rebel Wilson wasn’t kidding when she said she might kill the #BAFTA2022 It’s embarrassing to watch,” a sixth posted, while another said: “If I got a pound for every time Rebel Wilson has a flat joke, I’d be a millionaire in 5 minutes.”

Ricky Gervais should have hosted.

It wasn’t all negative though – others appeared to love Rebel as host.

One said: “Rebel Wilson has done a wonderful job hosting the #BAFTA2022. I do hope they’ll bring her back next year!”

Another praised the star, saying: “Rebel Wilson is my spirit animal #BAFTA2022.”

Leave us a comment on our Facebook page @EntertainmentDailyFix and let us know what you thought of Rebel Wilson hosting the BAFTA 2022 ceremony.