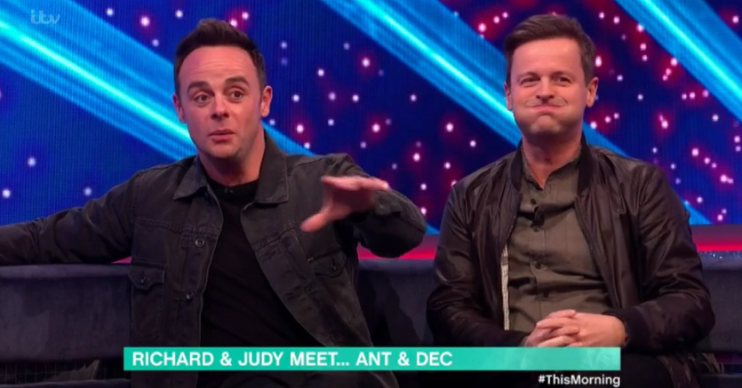 Dec found it amusing too!

The show will return on Saturday night after taking a break last year following Ant’s stint in rehab and drink-drive arrest in 2018.

During their appearance on Friday, the pair spoke about their nerves ahead of tomorrow night’s launch show.

Read more: Ant McPartlin and Dec Donnelly want to make their own sitcom

When asked if they get nervous, Ant said: “Yes! Especially for Takeaway because we rested last year so we’ve had a longer period off air so you do get very nervous bringing it back.”

Dec added: “And because it’s live and a lot of it is with audience surprises and surprises with people on Skype… if something technically goes wrong then the whole thing is in the air.”

Richard Madeley, who was hosting the show alongside wife Judy Finnigan, asked: “Do you have a plan B?”

Ant replied: “Kind of. There’s contingency plans all over the place but it won’t be as good as plan A!”

Richard asked: “Has that ever happened where you’ve had a complete breakdown? I don’t mean personally…”

Laughing, Ant said: “Oh that’s happened!” to which Richard added: “We’ve all been there haven’t we?”

Ant continued: “We’ve had people not turn up or not sit in the right seats.”

Speaking about nerves before the show, Dec said: “Before you go on air, it’s like that moment when you’re on a rollercoaster and you’re going up, up and up and it’s taking you up before that first drop.

Has that ever happened where you’ve had a complete breakdown? I don’t mean personally.

“That first drop is the moment you go on air and then you’re just on it.”

When asked if they sleep the night before, Dec said: “No. Badly. I have anxiety dreams. I’ve got a TV in my bedroom with a little red standby light on it and I wake up and I see that red light in the middle of the night and I’m like, ‘oh my God we’re on! I’m not ready!'”