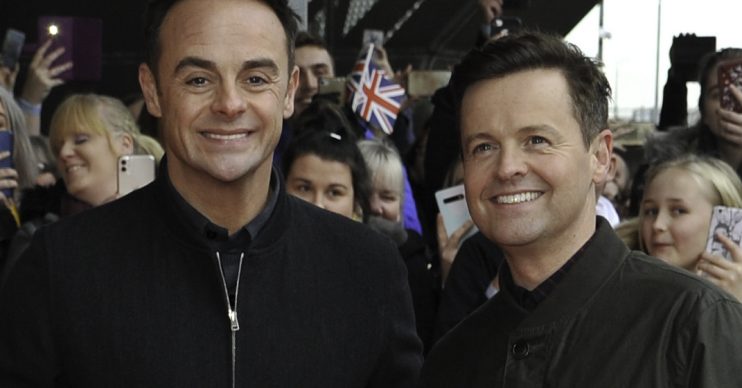 Ant McPartlin and Dec Donnelly want to make their own sitcom

This would be hilarious

Presenters Ant McPartlin and Dec Donnelly have revealed they would love to make their own sitcom.

The Geordie duo confirmed they have discussed the prospect of filming a comedy drama “quite seriously” over the years and at times “got quite close” to finalising a deal.

In a chat with The Sun, Ant revealed his hopes it will eventually become a reality – although Dec admitted any such project would have to be “the right thing at the right time”.

Ant told the publication: “We’ve talked about it quite seriously in the past. We’ve got quite close. We did a version of The Likely Lads, which we loved.

“And we loved the process of it — rehearsing it and doing it in front of a live studio audience.”

We’ve talked about it quite seriously in the past.

Dec said: “You’ve got to get the idea right and make sure it’s the right thing at the right time. The other thing is finding time to do it with the three big shows we’ve got.”

The pair were speaking to The Sun ahead of the new series of their variety show, Ant and Dec’s Saturday Night Takeaway.

Earlier this month, ITV announced that the programme will get underway on February 22 after an almost two-year break.

Ant and Dec shared the news with fans on Twitter, writing: “Right then, who wants to know when the new series of @itvtakeaway starts?”

ITV then replied, “We’re on it!” alongside a GIF revealing the start date, leaving fans thrilled.

It followed a hilarious promo released by ITV in which Ant and Dec promised this series will be the “best ever”.

In the advert, the hosts were seen sitting at a desk at the ‘Saturday Night Takeaway HQ’ as they watched a previous episode of the show.

Ant asked Dec: “Do you really think we can make the new series of Saturday Night Takeaway the best ever?”

Dec replied: “Yeah, of course we can!”

Ant then said, “We can?” to which Dec added, “We can-can” as he started singing.

In the song, the pair revealed the new series will be packed with “stunts and games galore” as well as “loads of stuff that’s up for grabs” including “amazing prizes”.

Presenter Stephen Mulhern also featured in the promo, confirming he will be part of the upcoming series.

Are you looking forward to the new series of Saturday Night Takeaway? Leave us a comment on our Facebook page @EntertainmentDailyFix and let us know.