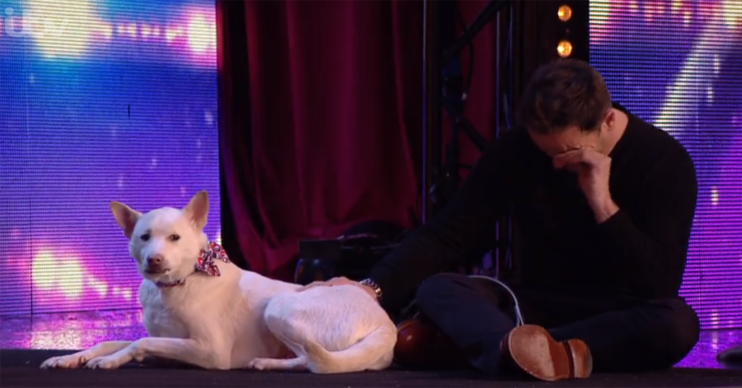 TV’s Ant McPartlin wiped away tears over a dog saved by the meat trade on last night’s BGT.

As Amanda performed the trick in front of the judges, hosts Ant and Dec Donnelly sat down next to Miracle on stage.

Amanda revealed she has more than 40 dogs and she’s saved 19 from the dog meat trade.

He spent the early part of his life in unimaginable conditions.

A message on a screen read: “Miracle has been at the heart of our family for six years, but he wasn’t always as happy and healthy as he is today.

“He spent the early part of his life in unimaginable conditions as a victim of the dog meat trade.

“He was discovered crushed in a cage with over 1,000 other dogs. Believe it or not this was him.”

The audience gasped in horror as a photo of Miracle in a cage with other dogs appeared on the screen.

Ant is then seen wiping away tears as he watched the emotional footage.

It continued: “When the rescuer first saw him she thought he was dead, but when her camera flashed, he opened an eye. It was a miracle he was still alive.

As part of Amanda and Miracle’s act, the judges had randomly chosen one photo each of one of Amanda’s 40 dogs.

Before their appearance, Miracle had chosen which four dogs to bring to the studio.

The pooches were then let out of a big dog house on stage.

The dogs which were on the judges’ cards ran out to greet Ant and Dec as the audience cheered.

The judges were left emotional as well as viewers.

Some people said Amanda and Miracle deserved a Golden Buzzer.

One person said on Twitter: “Miracle and all the other doggies deserved that golden buzzer tonight!”

Another wrote: “Amanda and miracle definitely should of got the golden buzzer!!”

A third added: “Wish all the judges hadn’t used their golden buzzers! Miracle defo deserved one.”

Miracle and all the other doggies deserved that golden buzzer tonight! 😭❤️❤️ #BGT

Amanda and miracle definitely should of got the golden buzzer!! #BritainsGotTalent #bgt #goldenbuzzer