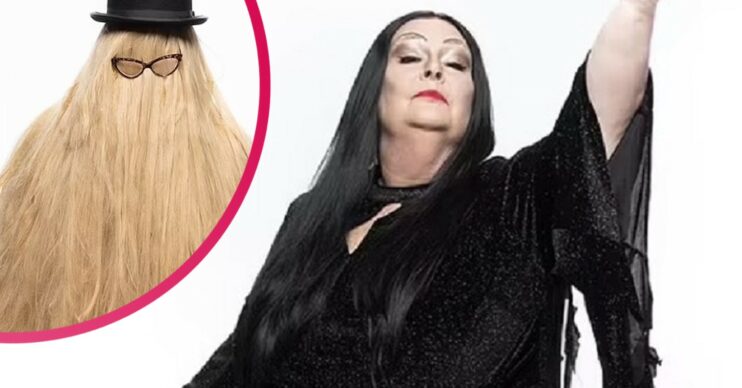 Anne Hegerty has transformed herself for The Chase Christmas Special this year.

The ITV series returns for the festive season on Boxing Day for the second of two Christmas specials.

This time around Anne Hegerty, Darragh Ennis, Mark Labbett, Jenny Ryan, Paul Sinha and Shaun Wallace are dressing up in their spookiest attire.

We’re not quite sure how that fits with the festive season, but we’re going with it…

The Chase stars transform themselves for Christmas Special

The beloved quizmasters disguised themselves as The Addams Family in a bid to scare off the celebrity competition.

Kate Silverton, Ruthie Henshall, Iain Sterling and the Rev Richard Coles are all hoping to out run the Chasers and win cash for their chosen charities.

Anne looks glamourous in a long black wig while doing her best impression of the iconic Morticia Addams.

However, Jenny appears to have gotten the short end of the stick. The usually glam star is instead hidden beneath a mass of blonde hair while dressed as Cousin Itt.

The Boxing Day Special will air on ITV1 at 5pm (December 26).

In the meantime, Bradley Walsh recently confessed that he might soon consider retirement.

The quiz show host has fronted the ITV show since 2009. But he doesn’t plan to be there forever.

As a result of his remarks, Chaser Jenny Ryan spoke out and insisted the show just wouldn’t be the same without the presenter.

She said: “It would not be the same show without Bradley, he’s a fabulous host and I really enjoy working with him.”

In fact, Jenny says the show was only a hit because of Bradley taking part.

“I was involved in the test pilot. As soon as they said Brad was on-board I knew it was going to be a hit,” she added.

Meanwhile, will you watch The Chase Christmas Special? Let us know on our Facebook page @EntertainmentDailyFix.