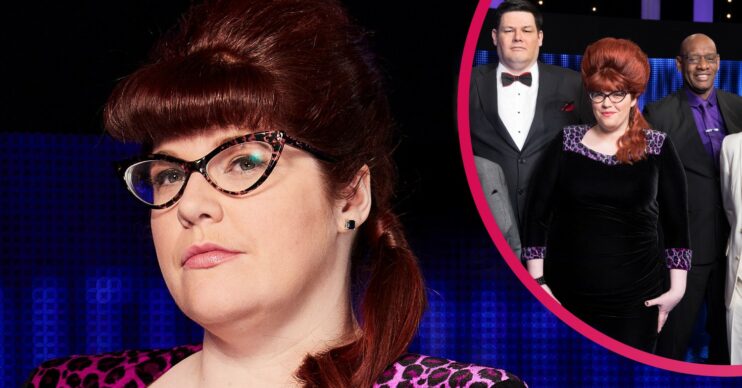 Jenny and her co-stars were hanging out backstage

The Chase star Jenny Ryan has shut down any rumours of a feud behind the scenes, by sharing a backstage snap on Twitter.

Jenny cheekily captioned the shot: “We’re having another ‘bitter feud’ backstage. As you can see the six of us can hardly bear to be in the same room.”

The photo shows Jenny and the five other Chasers from the ITV quiz and spin-off Beat The Chasers hanging out together in the Green Room during filming.

What did Jenny Ryan from The Chase say?

Jenny, better known to fans of The Chase and Beat The Chasers as The Vixen, was referring to reports of disharmony between the six of them.

And her followers on the social media site were quick to join in with the fun.

One said: “I can see it all kicking off.”

Another added: “Blimey! It’s all kicking off there, isn’t it, Jenny?”

What else has been going on with the Chasers?

Jenny was forced to comment on social media earlier this year after apparently ‘punching’ Paul Sinha.

The Sinnerman got a question wrong during an episode of Beat The Chasers in January, earning him a cheeky pat on the arm from Jenny.

Jenny, who stunned fans by revealing her full name recently, took to Instagram to diffuse the situation.

She wrote: “I didn’t *really* hurt him! Honest!

“I’d forgotten the reverse was true…”

Paul poked fun at the incident too, joking on Twitter that he’d had to have surgery for his injury.

He tweeted: “Just returned from shoulder surgery. What did I miss?”

Meanwhile, another of Jenny’s co-stars, host Bradley Walsh, will be leading the way with ITV’s Christmas line-up.

It was revealed this week that Bradley has made a special festive edition of Breaking Dad, Bradley and Barney Walsh: Breaking Dad At Christmas.

The one-off Xmas special sees the father-and-son team travel to Iceland to take in the winter sights.

ITV says that they will explore volcanoes, glaciers and breathtaking landscapes, finding Christmas joy and terrifying challenges in equal measure.

Bradley said about the show: “Barney knows I hate the cold but I love Christmas, so I had to say yes to a festive road trip around Iceland.

“I just hope I can find somewhere to roast my chestnuts.” Cheeky.