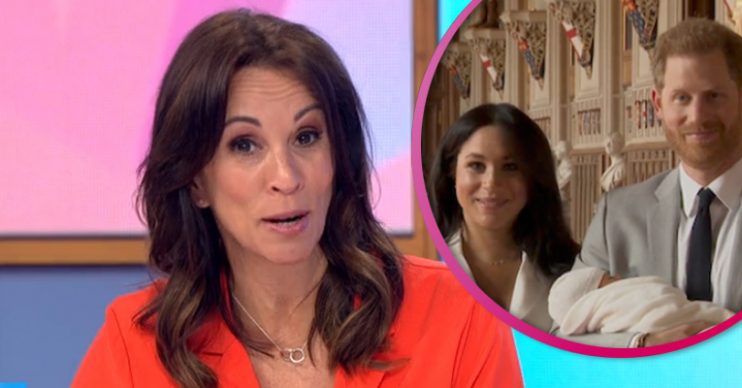 She said she doesn't think it's traditional

Andrea McLean admitted she thought Meghan and Harry’s baby name choice for their son was a “joke” at first.

The Duke and Duchess of Sussex, who welcomed their first child on Monday, announced yesterday that they have named their baby boy Archie Harrison Mountbatten-Windsor.

Speaking about the royal tot’s name on today’s Loose Women, Andrea said even though she likes the name Archie, she doesn’t believe it’s “traditional”.

She said: “I thought it was a joke when I first heard it,” to which her co-star Nadia Sawalha asked: “Did you really?”

Andrea continued: “I did. I thought ‘Oh’ Archie’,” as she mimicked a laughing tone, before adding: “‘Oh no, it’s real.'”

She added: “Because it’s just not a sort of royal sounding name. Maybe if it was Archibald or something like that.

Nadia said: “I love it because it’s very American. I called [my daughter] Maddie, Maddie, because it’s kind of American sounding.”

She then added: “I too thought, ‘Oh poor thing. It’s called Archibald,’ because that’s what I originally assumed, that it wasn’t Archie and the papers had immediately [just shortened it].

Nadia and Andrea aren’t the only celebrities sharing their thoughts on Archie’s name.

Good Morning Britain host Piers Morgan tweeted on Wednesday: “So the royal couple, in a striking blow for diversity & feminism, have given their son one of the most popular white middle-class first names, Archie, and a second name, Harrison, that was chosen because it stands for ‘Harry’s son’ (I’m serious..). Hilarious.”

In a separate tweet, he added: “I like ‘Archie’, but calling him Harrison ‘because he’s Harry’s son’ is just silly.”

So the royal couple, in a striking blow for diversity & feminism, have given their son one of the most popular white middle-class first names, Archie, and a second name, Harrison, that was chosen because it stands for ‘Harry’s son’ (I’m serious..). Hilarious. pic.twitter.com/kV0ezcwNLc

The latest addition to the royal family was introduced to the world by Meghan and Harry on Wednesday.

The couple posed and spoke to cameras inside St George’s Hall at Windsor Castle about becoming parents.

Meanwhile, on Thursday, new dad Harry jetted off to the Netherlands to launch the one year countdown to the Invictus Games 2020 – and he paid a very sweet tribute to his son.

While enjoying a bike ride in the Hague, Harry sported an Invictus Games jacket, which had “I am daddy” stitched onto it.