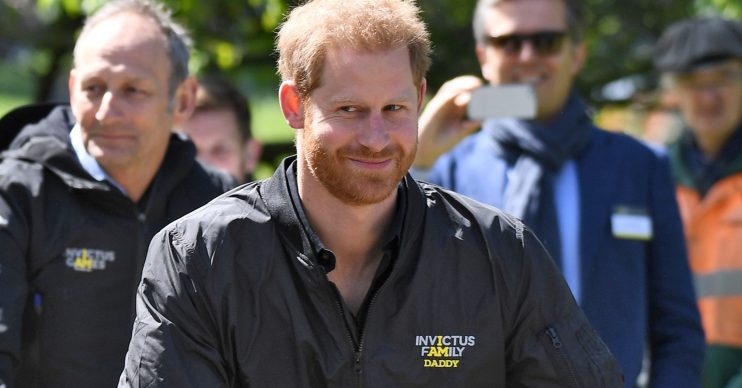 He wore an "I am daddy" jacket

The Duke of Sussex has jetted off to the Netherlands days after the birth of his son, Archie Harrison.

Harry became a dad for the first time on Monday after welcoming a baby boy with his wife Meghan, Duchess of Sussex.

The new dad, who showed off his son to the world on Wednesday, arrived in the Netherlands early Thursday to to launch the one year countdown to the Invictus Games 2020 – and he paid a very sweet tribute to his son.

The new daddy enjoyed a bike ride in the Hague and paid tribute to his little boy in the cutest way.

He sported an Invictus Games jacket, which had “I am daddy” stitched onto it.

Meanwhile, Harry spent the day in the city learning about the preparations that are taking place for the games next year.

The prince was also given an adorable white babygro during the launch, which had the words “Invictus Games” printed on it.

Prince Harry presented with Invictus babygro at launch of #IG2020 in The Haguehttps://t.co/u3XKlf4uSo pic.twitter.com/NomoXxgf6n

Harry became a dad for the first time on Monday (May 6) when his little boy Archie was born.

A few days before the birth, Buckingham Palace announced that Harry had postponed his trip to the Netherlands from May 8 to May 9 “due to the logistical planning for the travelling press to cover visits and engagements by The Royal Family”.

Baby Archie attended his first photocall on Wednesday as proud parents Meghan and Harry showed him off to the world in front of cameras inside St George’s Hall at Windsor Castle.

Speaking about parenthood, Harry said: “It’s great. Parenting is amazing. It’s only been two days, three days, but we’re just so thrilled to have our very own bundle of joy.”

New mum Meghan – who looked radiant in a white blazer dress – added: “It’s magical, pretty amazing. I mean I have the best two guys in the world. I’m really happy.”

Hours later, the couple announced their baby boy’s name alongside a photo of the royal tot meeting his great grandmother the Queen and Prince Philip.

Meghan’s mum Doria Ragland, who was by her daughter’s side at the birth, was also in the photo.

What do you think of Harry’s “I am daddy” jacket? Let us know what you think by leaving a comment on our Facebook page @EntertainmentDailyFix!