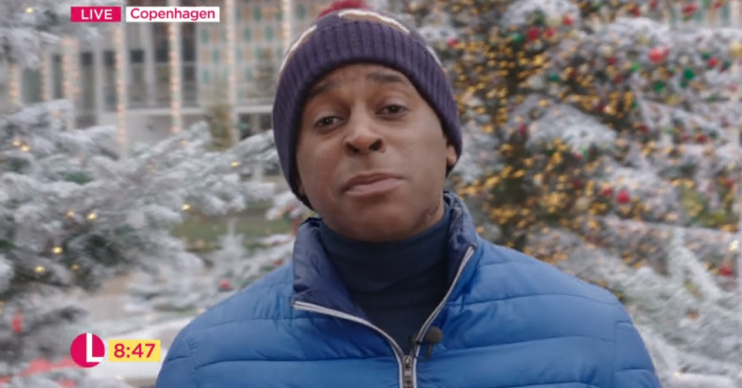 It seems Andi Peters took Ant and Dec’s joke about him on last night’s I’m A Celebrity with good grace – and even admitted earlier today he had been “excited” to be mentioned on the ITV reality show.

TV presenter Andi, 49, also sent himself up in a similar manner to Dec’s perceived impersonation of him when he presented his regular competition slot on Lorraine this morning.

The Geordie pair appeared to take a dig at the former BBC broom cupboard fave as they bantered about telly contests featuring keen as mustard hosts.

Referring to scenes that had just been shown of the celebrity contestants aboard a big boat, Dec reflected: “I was thinking, isn’t it nice to see a daytime TV presenter standing on a luxury yacht without hearing the words: ‘You and a friend could win £50,000 for life’.”

He then did a little twirl on the spot as he pointed his finger in the air.

I don’t think anyone notices what I do, except Dec Donnelly!

But Dec played ignorant, responding: “Who?”

Speaking from Copenhagen this morning, Andi seemed to see the funny side of the swipe.

“I was so excited Lorraine!” he said.

Andi continued: “Let’s be honest, I don’t think anyone notices what I do, except Dec Donnelly!”

He also mimicked Dec’s showbiz spin as he presented his own segment, holding a finger aloft.

It seems apparent there is no bad blood between Andi and the lads, especially after Dec apologised on Twitter after the show.