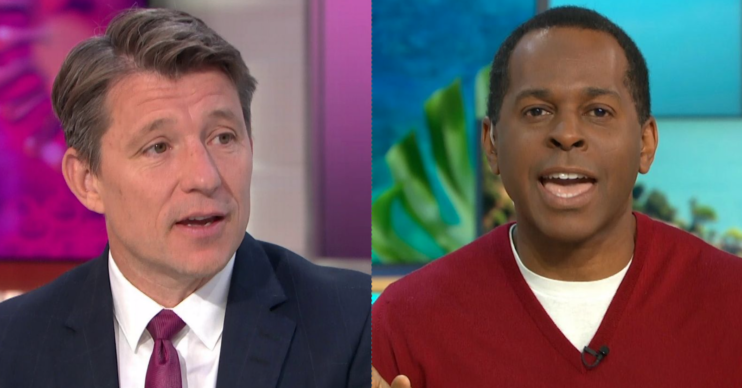 Andi Peters admitted he’d been given a telling off by Good Morning Britain bosses today (May15).

While presenting the competition segment live from his garage, he confessed to Ben Shephard and Ranvir Singh that producers weren’t happy.

Seeming a little stressed, he revealed he’d been told to hurry up and finish his presentation.

“Leave it,” he snapped. “Look they told me off for running out of time – the miserable people.”

Ranvir and Ben then looked a little shocked by the outburst.

Poor Andi then suffered an embarrassing blunder as a prop came crashing down behind him.

As he picked up the dot matrix screen from the floor, he looked concern as he admitted the device had broken.

Bizarrely, he then started to jokingly punch the screen.

Laughing off the gaffe from the studio,. Ranvir quipped: “Normally you’d be able to blame someone but we know you set this all up yourself because you’re all on your lonesome.”

Andi then explained he’d used sticky tape to hold up the gadget but it had still fallen anyway.

“I’ve got so many of these sticky things that hold literally all of this together,” he snapped.

Andi was attempted to tell viewers about the GMB competition Free Cash Fridays at the time.

Ever the professional, he tried to get things back on track as he told viewers about today’s £3,000 cash prize.

“I would love for you, genuinely you watching right now, to be our next winner because the feeling you get when you get that call can only be amazing,” he said.

The host then pointed out a red phone behind him, telling viewers he’d be calling the winner later this morning using that exact telephone.

However, he then suffered another huge fail when Ranvir pointed out that not only was it not plugged in, but it didn’t even have a cord.

Ben couldn’t resist teasing his co-host a little further by adding: “Do you need the £3,000 to fit the dot matrix screen, Andy?”

Awkwardly, the presenter didn’t seem too chuffed by the comment on this occasion.