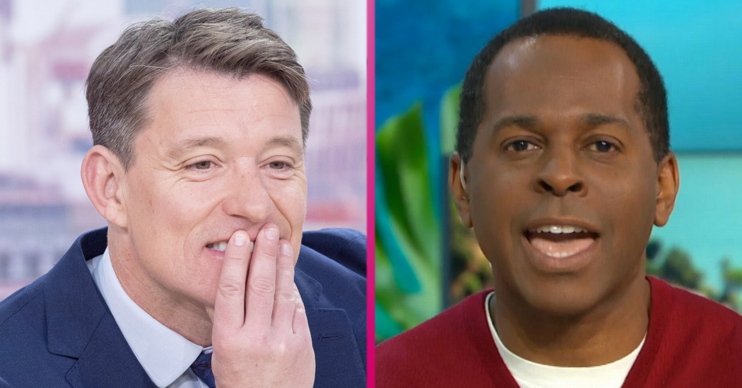 The star was tipped to host Blue Peter in the Nineties

Ben Shephard teased Andi Peters today (May 28) for being rejected by Blue Peter back in the Nineties.

Speaking on Good Morning Britain, he laughed at his pal for not getting the presenting gig.

“I can’t believe you didn’t get the Blue Peter job all those years ago,” he quipped.

Ranvir Singh then stepped in and jokingly told Ben off for teasing Andi.

Not at all bothered, Andi took the opportunity to clear up what really happened with the long-running children’s show almost three decades ago.

“Rude,” he hit back. “Quick fact check – I was offered the Blue Peter job!

“I turned it down because I wanted to do Live & Kicking.”

Andi continued: “When he offered it to me, I was really conscious that I didn’t want to do the job.

“I got really upset and ran all the way to the controller of BBC One and said ‘They just told me that I had to do Blue Peter but I don’t want to do it, I want to do Going Live instead’.

“Luckily, he said don’t worry, you’ll get to do Saturday mornings. So yes! The rest is history.”

Andi went on to his Live & Kicking for three years between 1993 and 1996 alongside Emma Forbes and John Barrowman.

Ben Shephard steps up the banter

After being put in his place, Ben had more sarcasm to deliver to Andi.

He joked: “Great insight into the world of Andi Peters.

“I wasn’t expecting you to tell that story, I was just going to tease you. I’m glad you did though.

“How long has it taken for you to break that news? Maybe 25 years?”

Still, Ben’s banter didn’t grind on Andi to the extent it did last week when he compared him to Donald Trump.

Poking fun at his competitions, he said: “It’s almost like listening to Donald Trump trying to give a speech.

“It’s very complicated all this money and all these competitions.”

Andi was so irritated he jokingly smashed a framed photo of Ben with his Ninja Warrior co-stars Rochelle Humes and Chris Kamara.

However, he opted not to break any more of his set on today’s show.