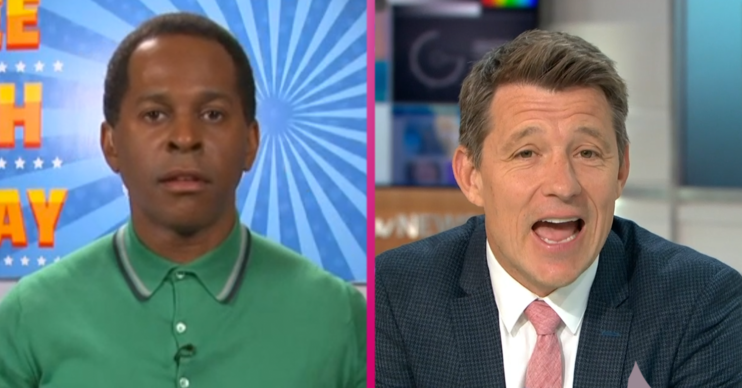 The presenter became visibly frustrated with the show’s anchor after he deliberately kept teasing him about his competitions.

During lockdown, Andi has had to promote his competitions from his garage.

In a bid to try and make his pad look more interesting on camera, he’s gradually been adding more decorative props to sit in the background.

However, Ben wasn’t too impressed by his choice of posters.

“Andi, have you just nicked that banner from a First Direct billboard?” he laughed.

“You either did that or you’re pitching for some kind of work.”

Clearly irritated, Andi hit back: “I actually had that specially commissioned and made.

Laughing, Ben then poked fun at another prop sitting behind Andi.

Pointing to a bike that was sitting behind him, Ben suspiciously asked why that hadn’t been given away to a competition winner already.

Getting frustrated, Andi. explained: “Right. No. The bike is in the £101,000 giveaway which is back next week.

“That competition if still on. If you want to win the £101,000 and my old bike, then you need to go online and register.

“By the way Ben, thank you for giving me the opportunity to talk about my other competitions!”

Looking a little confused, Ben then made a comparison that didn’t sit well with Andi.

“It’s almost like listening to Donald Trump trying to give a speech,” he quipped. “It’s very complicated all this money and all these competitions.”

Andi responded by then grabbing a framed picture of Ben with his Ninja Warrior co-stars Rochelle Humes and Chris Kamara.

While on camera, he then smashed the photo to the sound of glass shattering everywhere.

“So harsh,” she said. “Someone might have paid money for  that!”

But Ben didn’t seem too bothered and joked to the camera, “that’s showbiz for you.”

One wrote: “@andipeters showed what he lacks to be a professional presenter this morning on #goodmorningbritain.”

Another then added: “Andi Peters getting visibly frustrated at Ben shepherd is making my morning #gmb.”