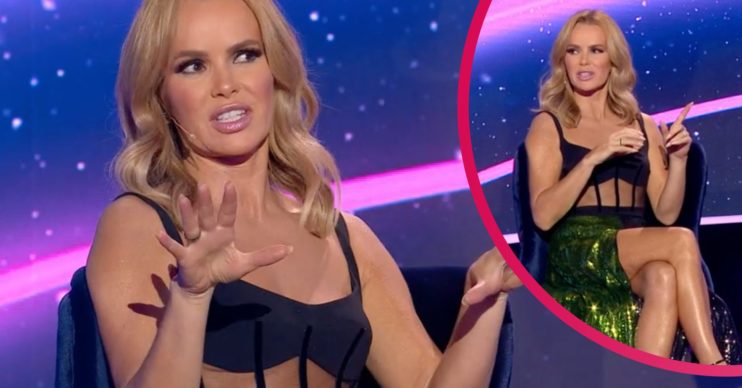 Amanda Holden leaves little to the imagination in see-through dress

Amanda Holden left little to the imagine with her choice of dress on I Can See Your Voice last night (May 29).

In fact, the racy see-through number left many fans gobsmacked!

Amanda gave fans an eyeful of her pins as she sat alongside Jimmy Carr, Alison Hammond and Ricky Wilson.

And the glamorous TV favourite, 50, also impressed with her hair, receiving plenty of compliments from social media users.

What did Amanda Holden wear?

Amanda’s latest ensemble certainly came in for a lot of attention from admirers.

Her floor-length, shimmering emerald skirt had a split which highlighted her legs.

And it was certainly a show-stopping look for the final episode of the I Can See Your Voice series!

What did Amanda Holden say about her dress?

Amanda gave credit to stylists and make up artists as she hyped last night’s show beforehand on social media.

She shared an Instagram post showing herself looking flawless in her green skirt as she perched on steps.

What is Amanda not wearing?

Amanda also bigged up designers YSL and David Koma, as well as a jewellery brand.

Several viewers noted on social media just how much they appreciated Amanda’s appearance.

“Wow! Legs for days!” one fan posted on Facebook.

“Can’t concentrate on anything but Amanda’s dress and legs,” admitted another observer.

Someone else, meanwhile – joking about Amanda’s skimpy outfit – quipped: “What is Amanda not wearing?”

However, it wasn’t just Amanda’s clothes that came in for praise.

Her hair and make-up also caught the eyes of many of those watching at home.

One person reflected: “The length of Amanda’s hair is nice not too long or short #icanseeyourvoice.”

Amanda Holden BBC One I Can See Your Voice