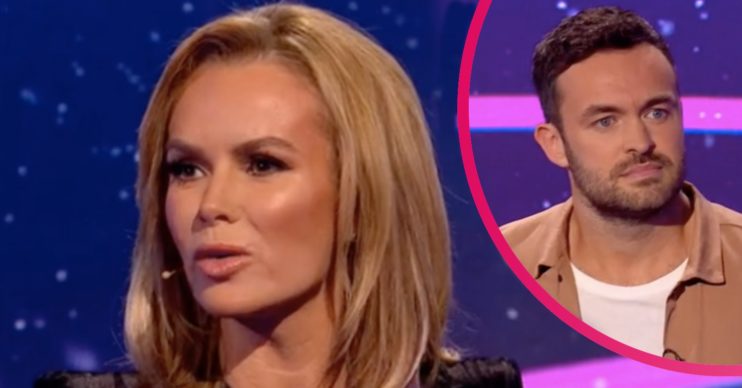 She's had a number one album!

Amanda Holden appeared outraged on Saturday’s episode of I Can See Your Voice.

The actress turned celebrity judge, 50, was questioned over her professional singing status.

During an episode of the new BBC gameshow, a contestant appeared to imply that she wasn’t a singer.

As the celebrity judges debated over who was a professional singer on the show, one of the contestants made a cheeky comment.

He said: “If you want to be a professional singer…”

How did Amanda Holden react?

Stunned Amanda replied: “I AM a professional singer!”

Then Jimmy Carr defended her with: “I’ll stop you there, she had a number one album last year.”

Adding: “I’m just mentioning that because I don’t want her to have to mention it again.”

Brothers Joe and Daniel from Middlesborough went on to win £10,000.

However, viewers couldn’t help but notice Amanda’s awkward moment over on Twitter.

Many pointed out how funny and rather cringe their interaction was.

This guy on #ICanSeeYourVoice going to Amanda Holden “if you want to be a professional singer” pic.twitter.com/SiSNX844cs

But Jimmy was correct. In fact Amanda did have a number one album with Songs From My Heart.

How well did Amanda Holden’s music do?

The album reached number one in October of last year.

The record included her cover of Over The Rainbow, which proceeds went to NHS charities.

At the time Amanda said she was astonished at how well her album performed.

As she had feared she’d left it too late in her career to become a music star.

While chatting to Official Charts, Amanda revealed: “It was always a big childhood dream of mine to be a singer in the charts.

“To be honest I thought the opportunity had passed me by.

“This career moment in my life has honestly been the most thrilling so far. Made all the more special because my husband and children were such a huge part of it too.”

The album also includes a track dedicated to her husband Chris Hughes and stillborn son Theo.

Called With You, it is a track taken from the musical Ghost.

Tragically Amanda lost her son in 2011 while she was seven months pregnant.

She was forced to give birth to him due to her advanced stage of pregnancy.

The star told The Mirror of the song: “The last lines of this song are ‘You took my life with you, Took my world with you’ and so this is for Theo, our baby who was born sleeping and for Chris who stayed strong when I fell apart.”