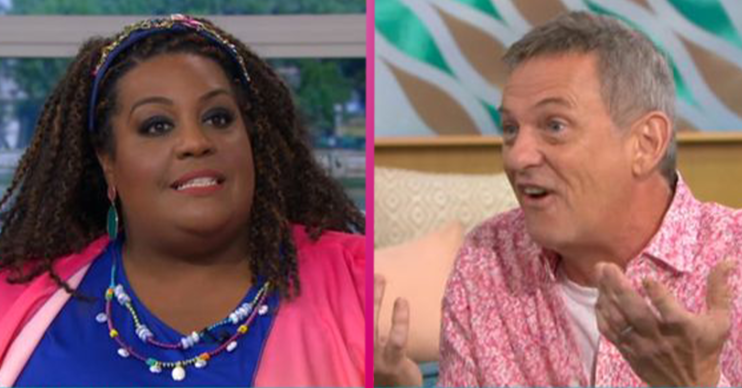 Matthew Wright appeared to fat shame and “sexualise” the statue of Princess Diana on This Morning today (July 2).

The statue, which stands in Kensington Palace’s Sunken Gardens, was unveiled by Princes William and Harry yesterday.

It commemorates what would have been her 60th birthday.

However, not everyone appears to like it – and This Morning host Alison Hammond came to blows with Matthew Wright today as they discussed the statue.

What happened about the statue of Princess Diana on This Morning?

Alison and co-host Dermot O’Leary welcomed Matthew and royal expert Camilla Tominey to the show to discuss the Diana statue.

And it’s safe to say that Matthew most certainly isn’t a fan of artist Ian Rank-Broadley’s work.

He said: “The statue, though… I just hate it. Diana was always just – my mum used the phrase ‘with it’, she was always super cool and fashionable. And you just think she looks frumpy.”

However, Matthew wasn’t done yet.

“She just looks too… it’s too wide at the waist and it just makes her look a little bit…,” he started.

However, Alison interrupted and blasted: “Are you being serious?!”

“Yeah, I hate it,” Wright insisted.

Alison then asked Camilla what she thought of the statue.

“I think it’s a really nice statue. Camilla, do you like it?” she asked.

“I heard some art critics say she looked a bit like David Bowie or a young Theresa May,” she started, “and I thought oh God, that’s a bit harsh.”

She added: “And there was some comment about whether her top was too low cut.

“Actually, I think that seeing her with children is very appropriate and ultimately it doesn’t matter what we think or what our critics think, I think the most important thing here are William and Harry.

“They helped design it, they think it’s great.”

“You’ve got to remember it’s a statue, it’s not going to look exactly like her,” she said.

Keen to have the last word, Matthew stated: “Just for me, I see people comparing it to the Michael Jackson statue and the Ronaldo statue – it’s not like those.”

Alison responded: “I think it’s a bit strong, hate though.”

Viewers were less than impressed with Matthew’s comments, with one accusing him of “sexualising” the statue.

“Matthew Wright sexualising a statue saying the hips are too wide… okay then,” they said.

Another added: “I wish they wouldn’t have Matthew Wright on the show slating Diana’s statue, his opinions aren’t needed.”

What did you think of the segment – and the statue? Tell us on our Facebook page @EntertainmentDailyFix.