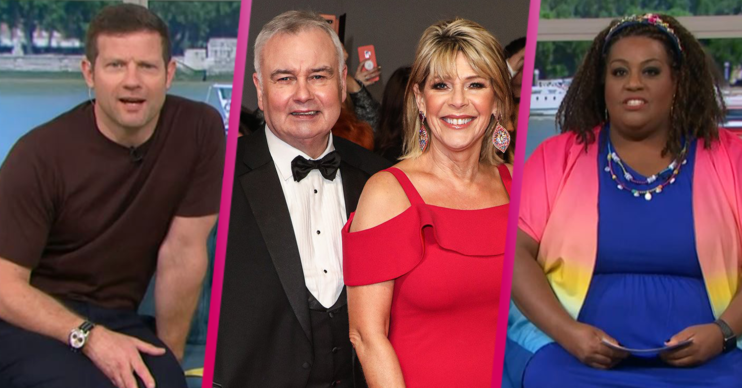 So are Eamonn and Ruth back next week?

ITV viewers were left divided today as Friday This Morning hosts Alison Hammond and Dermot O’Leary revealed they’d be heading off for their summer break.

Opening the show today (July 2), the pair revealed they were presenting their “last show of the season”.

But, as Holly Willoughby and Phillip Schofield didn’t say their goodbyes yesterday, have they also broken up for the summer holidays?

ED! has contacted ITV and we’ve got all the goss!

What has ITV said about This Morning next week?

ITV confirmed that today’s This Morning is Alison and Dermot’s last until September.

However, Holly and Phil are sticking around for another week.

They’ll host Monday to Friday next week and then Ruth Langsford and Eamonn Holmes will return to front the show all week from Monday July 12.

How did This Morning viewers react to the news?

After a hilarious run of Friday fun with Alison and Dermot at the helm, viewers were divided about their departure.

“I’ll miss Alison and Dermot on a Friday,” declared one.

Another fan added: “How amazing is Alison Hammond, she makes my day every Friday!”

However, while we couldn’t agree more, not everyone on Twitter was sad about the presenting pair’s summer break.

“This should mean that next week is Holly and Phil’s last, as they’ll do the Friday show. Then we get Eamonn and Ruth back!!” declared one fan of the married couple.

“No more Alison and Dermot until September,” said another, “but loving Alison’s cardigan.”

Another was a lot more blatant about their joy at Alison and Dermot’s holiday.

This should mean that next week is Holly and Phil’s last, as they’ll do the Friday show.

Then we get Eamonn and Ruth back!! ❤️ #ThisMorning pic.twitter.com/5Pf9HpWBaF

What have Ruth and Eamonn said about their return?

Last month it was revealed that Eamonn and Ruth would return to This Morning to host the ITV daytime show for the summer.

The pair were replaced by Alison and Dermot in their regular Friday slot at the start of the year.

Speaking of their return, Ruth revealed: “We’ll be doing seven weeks from July. I’m looking forward to it.”

So who’s your favourite This Morning presenter? Tell us on our Facebook page @EntertainmentDailyFix.