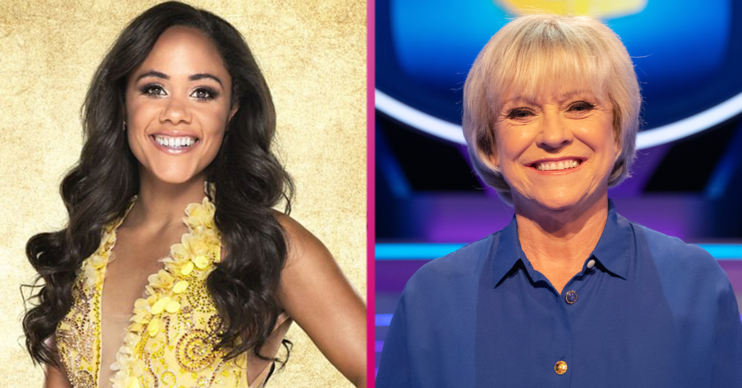 Sue has hosted the show for more than 20 years

Alex Scott is set to replace Sue Barker on BBC’s A Question of Sport, according to reports.

The former England football captain, who appeared on Strictly Come Dancing in 2019, is apparently in line to replace axed Sue, 64.

Earlier this week the BBC confirmed that Sue is leaving the popular quiz show after 24 years.

As a result, debate soon erupted over whether Sue was axed because of her age.

And now a source has told The Sun that Alex, 35, is having meetings with the Beeb about her joining the series.

The source said that the BBC is keen to shake things up, and that Alex is ideal for the role.

This has nothing to do with gender, nor is it a case of the BBC trying to be woke.

They said: “Alex is being lined up as host, as a direct replacement for Sue.”

However, they added: “This has nothing to do with gender, nor is it a case of the BBC trying to be woke.

“While a lot can happen over the next three months, as things stand, Alex is genuinely considered the best woman for the job.”

Read more: Boris Johnson ‘in bid to save Christmas from the rule of six’

Alex became most well-known to the public in 2019 when she competed on Strictly Come Dancing.

She was partnered with Neil Jones and they reached the quarter final.

She is an accomplished broadcaster and has hosted for The One Show, Soccer AM and Match of the Day – amongst others.

The BBC said in a statement that it was grateful for the many years Sue hosted A Question of Sport, however, the broadcaster clearly felt a change was in order.

They said: “We would like to thank Sue for her enormous contribution as the show’s longest-reigning host over the last 24 years, and Matt and Phil for their excellent team captaincy.”

“Together they have ensured A Question of Sport remains a firm favourite with the BBC One audience.”

Meanwhile Sue said she was “sad” to be leaving.

She said: “I’ve absolutely loved my 24 years fronting A Question of Sport, it’s been my dream job.

Phil said on Twitter, meanwhile, that the show has been a “great part of life”.

Matt tweeted that he would hugely miss being on the show, but he wasn’t yet sure how to respond.

ED! has reached out to Alex Scott’s representatives for comment.

Do you think Alex is the right person for the job? Leave us a comment on our Facebook page @EntertainmentDailyFix.