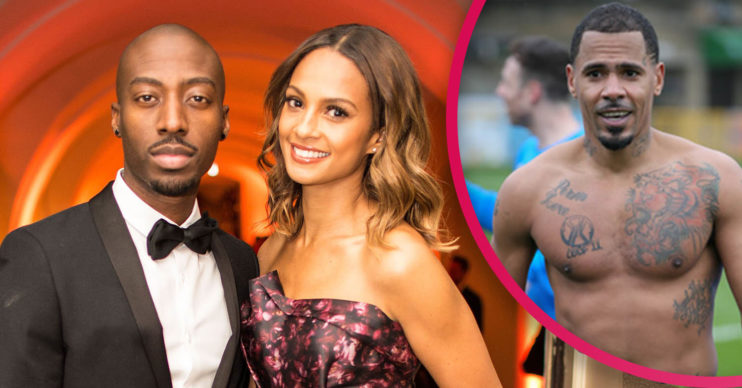 Is Alesha Dixon married and why did she split from first husband Harvey?

The Britain's Got Talent judge has two children with Azuka Ononye

The couple welcomed their second daughter Anaya Safiya in August 2019.

But when did Alesha meet Azuka and why did the Britain’s Got Talent judge split from first husband Harvey?

He is a dancer, choreographer, actor, writer, voice-over artist and creative director with more than 15 years’ experience.

The performer started dating Alesha in 2012, after she admitted on The Jonathan Ross Show to “kind of playing hard to get for about a year”.

However, her gameplay changed following a painful operation on her foot.

She added: “I couldn’t walk and he was literally sleeping on the floor looking after me every day.”

“I was just looking at him thinking, ‘That is for better or for worse isn’t it?’ I looked a state.

“He was sleeping on the floor because I was on the couch, I couldn’t even get up the stairs. If he can carry me to the toilet then he’s a keeper.”

The couple welcomed their first child two years into their relationship.

He then tried to propose to Alesha on several occasions but she turned him down.

She explained to The Sun: “AZ has asked me to marry him loads of times now. He’s always doing it, but I always say no.

“It’s like he’s joking around. I want him to buy a ring and get down on one knee.

“When he does that I’ll say yes straight away. I definitely want to marry him.”

Unlike many celebrities, they chose not to share any photographs from their big day with the public.

Opening up about her husband to Piers Morgan on Life Stories, Alesha said: “I am authentically myself when I’m with him.

“I don’t have to be anything other than who I am and it’s a great feeling when you can just be yourself with someone.

“And it’s like being with my best friend every day.”

How many children does Alesha Dixon have?

The couple welcomed their first child, six-year-old Azura Sienna in 2014.

After giving birth, the Britain’s Got Talent judge admitted she struggled with no getting enough sleep.

She told OK! Magazine at the time: “Sleep deprivation is the hardest thing. Everything else has been wonderful.

“When you’re exhausted, it’s hard to think of a second baby, but we’ll see! Maybe after a couple of years”

Why did Alesha Dixon and Harvey split?

Alesha Dixon married So Solid Crew’s MC Harvey in 2005 in a star-studded wedding.

Less than a year later, the marriage was over after he cheated with now ex-girlfriend Javine Hylton.

Reports suggested at the time that Alesha caught the pair in bed together.

But Harvey spoke out to set the record straight.

He told the Daily Mail: “The real story is that Javine’s ex saw my car outside the house and told Alesha I was seeing Javine.

“Alesha asked me when I got home. I could have lied, but I didn’t want to be in the marriage anymore.

“I knew I loved someone else and my heart was gone from my home. So I told her the truth. It’s the hardest thing I’ve ever done in my life.”

Following their split, Alesha refrained from discussing the details in public.

However, in 2014, she finally opened up about the ordeal on Pier Morgan’s Life Stories.

She said: “I just remember having a feeling when I was driving. I just felt so low in myself that I just thought I wouldn’t care if the car crashed.

“I was lost for quite a long time.”

Alesha added: “I remember sitting on floor in my house. You ask those questions: Why? What have I done wrong?”

The star went on to admit that the experience taught her “karma exists”.

Following the end of their marriage, Harvey and Javine split after the birth of their daughter Angel amid cheating allegations.

What is Alesha Dixon’s net worth?

Alesha Dixon’s net worth is approximately £4 million, according to Celebrity Net Worth.

The star reportedly signed a £1 million deal for her stint on Britain’s Got Talent alone in 2020.

“Simon Cowell adores Alesha and said he’d pay whatever she wanted to keep her on board,” a source told The Sun.

“The deal is £900,000 but includes a budget for travel, expenses and hair and make-up, which bumps it into six figures.”

Is Alesha Dixon on social media?

In addition, the BGT star is also on Facebook – @aleshadixonofficial.

Lastly, you can also keep up to date with Alesha on Twitter – @AleshaOfficial.