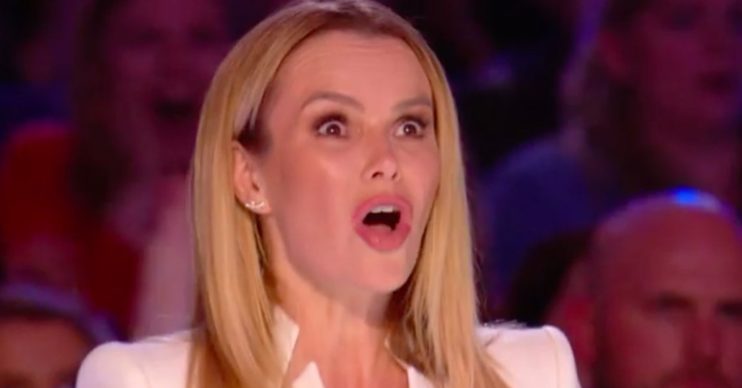 Lives are at stake when Britain’s Got Talent goes wrong.

Every year, magicians and death-defying stunt artists come on the show with increasingly dangerous tricks to impress the nation.

Terrifyingly, during their performance, he appears to almost hit her with a blade, leaving poor Marie looking petrified.

Despite the alleged mishap, the show goes on and the pair then invite head judge Simon Cowell to join them on stage.

Understandably, his pal Amanda Holden isn’t keen on the idea at all after what she sees and tells him: “Don’t you go up and have knives thrown at you!”

So Simon decides to force David Walliams to join him.

Commenting from behind the scenes, Declan Donnelly says: “Simon’s got a real fascination with danger acts. It’s not the first time he’s got up on the stage.

“It is dangerous because with that act there’s no trickery involved, it’s just someone throwing dangerous things at you. No, thank you!”

Once on stage, David and Simon stand back to back as Jason hurls giant blades at them.

Paramedics are on standby in case anything goes wrong – but will it?

If it does, this of course isn’t the first time Simon has been accidentally hit by a knife-throwing stuntman…

Back in 2018, knife-thrower Edward Pinder asked Simon to join him on stage and be part of his act.

Despite looking a tad nervous, the music mogul obliged and stood in front of a board while the pre-teen hurled giant blades at him.

Fortunately, he wasn’t hurt and everyone saw the funny side – at least while the cameras were rolling.

Behind-the-scenes, Ant McPartlin joked: “It’s how he would have wanted to go – let’s be honest.”

Escapologist Matt Johnson was taking increasingly dangerous risks to entertain the public back in 2018.

On one occasion, he clamped his chest into a solid steel straight jacket before locking his head into a clear box filled with water.

He warned production team that if he took longer than one minute and 45 seconds to escape, he was in trouble.

Matt did take longer than this and was seen clearly struggling.

He then gestured to the nearby paramedics to come and help him as the audience and judges feared he was going to die on stage.

Fortunately, Matt escaped just in time – but he wasn’t put through to the next round.

David commented: “This is the prefect act for anyone who wants to watch someone drown.

“I was really worried for you when the paramedic came on!”

The ice cream van man got all four judges up on stage with him as he performed a selection of traditional Greek dances.

As David, Simon, Alesha and Amanda hurled plates across the stage in time to the music, Bamba balanced a tower of glasses on his head.

He then set a napkin on fire and placed it in the top glass before they all came crashing onto the floor.

Worryingly, as the glasses landed, the flames didn’t go out!

Poor Declan Donnelly had to rush on stage to put the fire out in another case of Britain’s Got Talent gone wrong.

The very talented St. Patrick’s Junior Choir were thrilled to be in the BGT semi-final in 2017.

However, as they stepped out on stage to perform Roar by Katy Perry, Ant and Dec ran out and interrupted them.

Ant then explained that the BGT semi-final was being filmed in a new studio which is why the production crew were struggling.

Luckily, the problem was resolved quickly.

Mahny Djahanguiri attempted to introduce the world to doga when she auditioned for BGT in 2017.

In case you’re not familiar with the term, doga is yoga for you and your dog.

Unfortunately, the showcase didn’t go to plan in another classic example of Britain’s Got Talent gone wrong.

All four judges as well as hosts Ant and Dec decided to get involved with their pet pooches and joined Mahny on stage.

However, Ant’s pet pooch had a wee accident and peed in front of the 3,000 people sat in the audience.