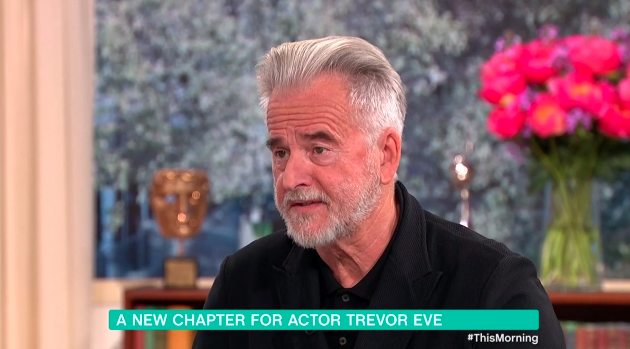 He admits it came upon him "fast"

Actor Trevor Eve has spoken of his secret mental health battle, which he needed “years of therapy” to recover from.

The Waking the Dead star, 67, opened up about the issues while appearing on This Morning on Wednesday (May 8).

Trevor, who played DS Peter Boyd in the popular BBC crime drama from 2000 to 2011, was discussing his new venture as an author when he revealed his own personal experiences with depression.

Talking to Holly Willoughby and Phillip Schofield about his new book Lomita For Ever, he explained that mental health is a prominent feature in the book. And with good reason.

Trevor, who is married to Holby City actress Sharon Maughan, said: “There is a lot to do with mental health [in the book], which is something I have personal experience of. That’s a revelation, Phil and Holly.

“When it happened to me in 1994, those were the days when you had to keep things quiet.”

Phil agreed, saying: “That was a sign of weakness then. You could lose work over it.”

Trevor replied: “Of course you could. I probably will do now.”

The father of three – including daughter and Men In Black 3 star Alice Eve, who followed him into the profession – went on to reveal his recovery, which he says took years.

He admitted: “I dealt with it through years and years of therapy with a particularly wonderful therapist. And just being aware. It comes upon you fast, you have no preparation. You think: ‘What is happening to me?'”

Asked how he is today, the actor – who now lives between London and Los Angeles – said: “I can laugh [now]. It did get better. I’m lucky because I got over it reasonably quickly and effectively.”

Trevor also insisted he has more fun the older he gets, and told the This Morning hosts that he’s about to start filming the second series of Discovery of Witches in Italy.

Fans loved seeing Trevor on the morning show, with one tweeting: “Not sure #TrevorEve was on @itvthismorning to talk about his mental health, but he spoke with emotion #MentalHealthAwareness.”

#ThisMorning always had a bit of a thing for #trevoreve 😘😉😂 @thismorning

Others expressed a sweet spot for the silver fox, with one typing: “#ThisMorning always had a bit of a thing for #TrevorEve @ThisMorning.”

Still got it, Trevor!

Are you a fan of Trevor Eve? Leave us a comment on our Facebook page @EntertainmentDailyFix and let us know what you think!