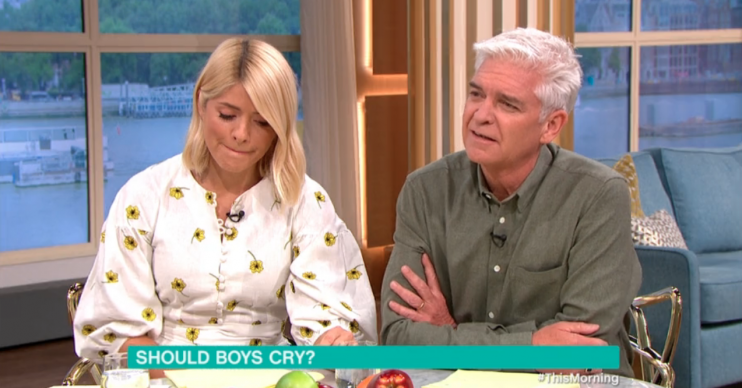 Phillip Schofield just about kept it in, too

This Morning’s Holly Willoughby appeared to stifle a laugh that could have come out at an inappropriate moment earlier today after it sounded like a guest mentioned something very different to what he actually said.

Fellow presenter Phillip Schofield also seemed to be aware of the potential for confusion over the words used during the debate about whether young boys should be encouraged to cry.

But while Hols had to look down at her notes and pursed her lips in an attempt to hold in her giggles, Phil pushed the conversation on with only a trace of a grin on his face.

Glenn was defending SAS Who Dares Wins’ Ant Middleton against accusations he was ‘sexist’ after the Channel 4 star said he wanted his nine-year-old son to have a “stiff upper lip” attitude when it comes to being emotional or risk being hit – even though Ant admitted he would be quick to comfort his daughter if she was upset.

Reflecting on his own upbringing, Glenn lamented the lack of direction he perceives there to be for young boys now.

“Boys aren’t as well disciplined nowadays,” he said. “They don’t respect their parents.

“They go out on the streets. They’re fighting, bullying, there’s no discipline or respect.

“And I was brought up the same. If I fell over I got a slap on the legs and told to man up.”

Viewers – as Holly and Phil may well have, too – immediately picked up on how guest Glenn Slater’s accent meant his pronunciation of “fighting” could be interpreted as him saying “farting”.

And several were impressed at how Holly and Phil managed to keep it together in the moments following.

“Ohhh the chap is saying fighting not farting!” twigged one fan.

Another tweeted: “Farting?? @hollywills and @Schofe trying not to laugh 😂.”

“Are boys farting or fighting? ⁦@Schofe⁩ ⁦@hollywills⁩ just kept it together without laughing 😂 out loud,” added a third.

And another viewer joked: “That’s what wrong with young men now, all that farting on the streets @thismorning @Schofe @hollywills . Well done in keeping a straight face 🤣🤣🤣🤣🤣.”