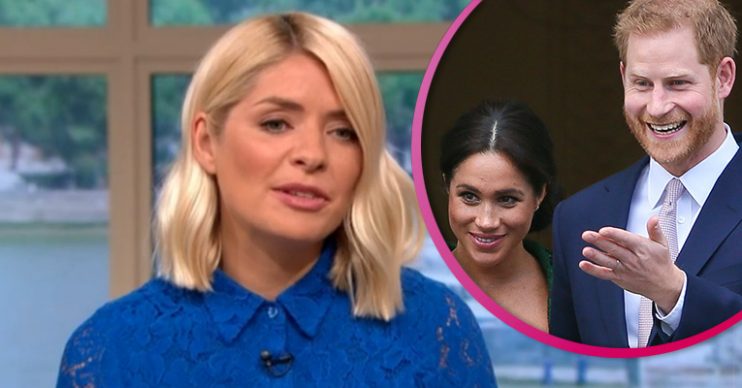 She sent a message to the royal couple

Holly Willoughby wore a stunning royal blue dress to pay tribute to the newborn son of the Duke and Duchess of Sussex.

Meghan and Harry became parents for the first time on Monday as they welcomed a little boy into the world.

On Tuesday’s This Morning, Holly sported a blue lace dress from Ganni with a pair of nude heels from Gianvito Rossi.

Fans loved the look with one person commenting: “You really suit that colour Holly… beautiful as ever.”

Another wrote: “Oh wow… I just love this colour, you look absolutely fabulous in this Holly,” while a third added: “Wow that’s a lovely dress, in keeping with the royal baby.”

Royal fans were overjoyed on bank holiday Monday when Harry and Meghan announced they had welcomed their first child.

Harry then spoke to the media and said the birth of his son was the “most amazing experience”.

It’s been said the little boy could be given the title of the Earl of Dumbarton – the title Harry was granted by his grandmother the Queen on the morning of his wedding last year as well as being given a dukedom.

Members of the royal family were “delighted with the news”.

Read more: The royal title Harry and Meghan’s newborn son could have

Meghan’s mother Doria Ragland, who was by her daughter’s side at the birth, was “overjoyed by the arrival of her first grandchild”.

What do you think about Holly’s tribute to the royal baby? Let us know what you think by leaving a comment on our Facebook page @EntertainmentDailyFix!