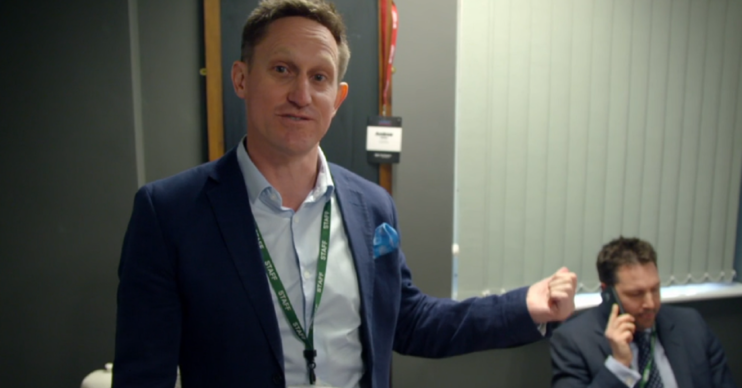 Many expected David Brent to turn up

The show, which got underway last night (Tuesday, May 19), drew a flood of comparisons to hit sitcom The Office. Some viewers even wondered if comedian Ricky Gervais might have secretly been involved.

In the first episode, viewers met newly appointed CEO Rob and other members of the team, among them brand development director Mark.

First-time chief exec Rob took viewers through some of the ambitious changes he was hoping to make at the business. Among his goals was doubling the size of Best Western’s already-impressive portfolio.

He also wanted to instill some key cultural shifts in the workforce.

Rob explained: “We want to live and breathe 17 conditions in our organisation. One of them, for example, is ‘Do I have a best friend at work?'”

Asked if he himself had a best pal at work, Rob said happily: “I love Val, my PA.”

He also introduced viewers to brand whiz Mark. Mark was asked what keeps him coming back to work each day. He said, proudly: “I love it. Passion. I love the business, love the company, love the brand.

Reacting to the programme on Twitter, one viewer wondered if The Office creator Ricky Gervais would be able to cook up such memorable characters.

“At his best I’m not sure Ricky Gervais could come up with characters as richly observed as almost everyone who featured in the first episode of #InsideBestWestern,” they tweeted, adding that it was “must-see TV”.

Another, who thought it seemed too good to be true, said: “Absolute comedy gold. Can’t be for real this. #InsideBestWestern #averybritishhotelchain.”

Someone else branded it a “total PR disaster” but admitted loving it, tweeting: “#InsideBestWestern was possibly my favourite fly on the wall documentary ever to come out of @Channel4. Total PR disaster, heroes, villains, dog going mental in reception. It had it ALL.”

Omg this is cringe!

Another asked: “Where was David Brent? Maybe he will show up to the cringe fest next week #InsideBestWestern.”

“#insidebestwestern are you The Office reincarnate?” wondered another viewer.

“Omg this is cringe!” one viewer said, adding: “The Office and David Brent, eat your heart out! #InsideBestWestern.”

#insidebestwestern Are you ‘the office’ reincarnate?

Omg this is cringe! The Office & David Brent eat your heart out! #InsideBestWestern

Others claimed it had put them off staying at a Best Western hotel.

“#InsideBestWestern watching the show I felt so embarrassed for the company and I don’t even work for @BestWesternGB,” said one.

They continued: “I have never stayed with this hotel chain and I can’t say the show made me want to either! Who ever let the show air… what were you thinking? #disater @rjppaterson.”

“After watching that programme, not sure that I would ever stay in a Best Western!” another viewer insisted. “Not sure if it was a serious programme or not! And as for the ‘hotel inspector’… #InsideBestWestern.”

What did Best Western say?

A spokesperson for Best Western told ED!: “What we hope came across last night is that Best Western is full of genuinely passionate, fun and friendly hotels and people.

“We are here to help the brilliant little British hotels and hoteliers continue to compete in incredibly tough times, especially the one we are seeing now.

“Our members are an amazing bunch of super-professional, proud families and owners trying hard everyday to put a smile on people’s faces. It is always a shame to hear that people might not consider staying with us, hopefully over the course of the series we can win them back around.

“As for The Office reference, we might make Handbags and Gladrags our company anthem! We don’t do boring, and never will. We are proud to be different and hope the British public enjoy seeing that.”

#InsideBestWestern watching the show I felt so embarrassed for the company and I don't even work for @BestWesternGB I have never stayed with this hotel chain and I can't day the show made me want to either! Who ever let the show air..what were you thinking? #disater @rjppaterson

After watching that programme, not sure that I would ever stay in a Best Western! Not sure if it was a serious programme or not! And as for the ‘hotel inspector’…#InsideBestWestern