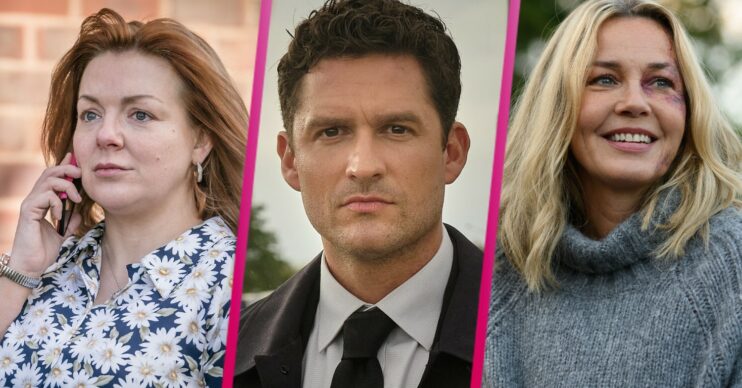 Hollington Drive may have come to a dramatic collision-crash of an ending, but TV fans should not despair as there are plenty more top dramas coming soon.

It’s about that time when the heating gets cranked up, all dreams of a bikini body go out the window – pass the biccies, will you? – and the TV channels deliver their very best series.

Here’s a look at the top dramas coming soon that promise to fill that Hollington-Drive-shaped-hole in your evenings.

And we’re talking soon – like this month and November!

Read more: The Tower on ITV: Start date and cast details including The Moorside’s Gemma Whelan and The Fall’s Emmett J. Scanlan

The Tower is a new three-part thriller based on Post Mortem, the first in Kate London’s Metropolitan series of novels featuring Sarah Collins and rookie cop Lizzie Griffiths.

The story starts when a veteran cop and a teenage girl fall to their deaths from a tower block in southeast London.

Left alive on the roof are a five-year-old boy and rookie police officer Lizzie.

However, within hours, Lizzie has disappeared, and Detective Sergeant Sarah Collins is charged with leading the investigation.

When the truth is finally revealed, the truth will cast its shadow over Sarah and Lizzie’s relationship and their lives.

The Tower is expected to air sometime in November.

We recently reported that Four Lives was delayed, as a result of COVID.

The pandemic caused the inquest into the four men’s deaths to be postponed.

The series could only be shown after the court case had been completed.

The Long Call is an upcoming four part drama on ITV1.

It’s an adaptation of the bestselling novel of the same name by Ann Cleeves – best known for penning the Vera and Shetland novels.

It sees Detective Inspector Matthew Venn return to live in a small community in North Devon with his husband, Jonathan (played by Declan Bennett).

Pearl Mackie plays DS Jen Rafferty, a former Londoner who has relocated to this isolated destination with her two teenage children.

After the body of a man is found on the beach close to Matthew’s home, the investigation throws suspicion on the whole community.

Matthew and his team have to get to the bottom of a case which brings with it old wounds and a deadly secret in order to expose the killer.

Showtrial on BBC One

Showtrial is the new crime drama from the makers of Line of Duty.

The drama focuses on the disappearance of working-class student Hannah Ellis.

But the police soon make an arrest that nobody expected.

Top dramas coming soon – Close to Me on Channel 4

Close to Me is a psychological suspense drama coming soon to C4, which promises to be every bit as exciting as the cast.

The A Word actor Christopher Eccleston and Danish actor Connie Nielsen take the leads in the tense six-part series which is due to air in early November.

The dramatic trailer shows lead character Jo bloodied and lifeless at the bottom of a flight of stairs.

She’s then rushed to hospital, where she later reveals she cannot remember anything from the past year.

Doctors tell husband Rob that his wife may never recover her memories.

But as her memories slowly begin to seep back, Jo realises she wasn’t alone in the house on the night she fell.

She remembers fighting for her life and screaming for someone to get out of her house.

The viewers will follow Jo as she “follows the breadcrumbs” to see where they lead her.

But she doesn’t like where the trail takes her and she begins to wonder if she is going mad.

Close to Me is based on the best-selling novel of the same name by author Amanda Reynolds.

Close to Me will air on Channel 4 in the autumn.

Will you be watching Close to Me on C4? Leave us a comment on our Facebook page @EntertainmentDailyFix.