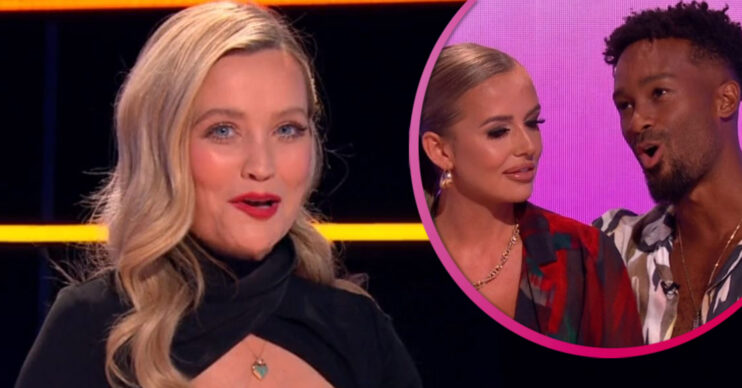 Some viewers cringed at the scenes

The Islanders came together again to relive their eventful summer of love, tears and arguments.

However, as Laura Whitmore hosted last night’s reunion special, viewers couldn’t help but say it felt very awkward and here’s some moments which even left us cringing.

Some people even wanted Laura to be replaced for next year’s series.

1) Millie and Liam reunite with Lillie

First up we revisited 2021 winners Millie and Liam and their journey so far out of the villa.

The couple were crowned winners of the series after rekindling their romance following a turbulent time after Casa Amor.

During Casa Amor, Liam took an interest in bombshell Lillie and even shared kisses with her.

However, he decided to stick with Millie before his antics all came out during the explosive recoupling as Lillie arrived in the villa to expose him.

Lillie insisted she thinks Liam and Millie are the “picture perfect” couple and it was “too good to be separated”.

Laura asked: “Liam you didn’t really get a chance to speak to Lillie, is there anything you’d like to say to her?”

He awkwardly laughed before saying: “Uh, what’s happened has happened… You’re a nice person, I’m a nice person. We can be friends, that’s that.”

The host then asked Lillie if she was dating footballer Jack Grealish after seeing photos of them together, leaving Lillie with her face in her hands.

Another slightly awkward moment was when Hugo reunited with Sharon, Amy, Andrea-Jane and Georgia.

The PE teacher had attempted to have connections with all four girls in the villa however decided to break them all off.

Hugo said: “I left with no regrets, it didn’t work out unfortunately, it’s a bit weird now sitting here with all four…”

Laura then brought up Hugo expressing his feelings for fellow Islander Chloe earlier on in the series.

Laura asked: “Do you think with Andrea-Jane and Georgia, you didn’t give them a chance because maybe you still had feelings for Chloe?”

However, Hugo replied: “No, definitely not. We’re shutting that down. It was just it didn’t work out,” as Chloe was seen laughing in the audience.

As the chat came to an end, Laura quipped: “I can feel the tension!”

Meanwhile, Laura briefly spoke to Mary and Aaron – who missed out on a spot in the final.

She asked the pair whether they had continued pursuing their romance outside of the villa.

However, Mary said nothing has carried on since they left because she’s had a “lot of things going on family wise”.

Aaron said: “It wasn’t my choice so…”

Laura added: “So awkward! Right, we’re going to move on to Abi and Dale.”

Another moment saw Faye relive her infamous meltdown in the villa after shouting at Teddy over his Casa Amor antics.

After seeing footage of her screaming at Teddy and some of the fellow male Islanders, Faye covered her face and awkwardly laughed.

Faye admitted: “There would have been another complaint if I had watched it back as well, from myself. Not my finest of moments.”

Teddy said: “It was painful, but we’ve moved on so much from it.”

Laura then asked Chloe why “none of the girls stepped in”, to which the Islander joked: “We were terrified, no one wanted to get in the way.”

5) Laura’s chat with Chloe and Toby

Laura also sat down and spoke with runners-up Chloe and Toby.

However, just like the other Islanders, Laura spoke about the couple’s turbulent times in the villa including Toby’s back and forth with his feelings about some of the girls.

In the villa, viewers saw Toby struggle to decide which girl he had the best connection with from Chloe, Abigail and Casa Amor bombshell Mary.

As Abigail and Mary joined the sofa, Laura said: “I just love an awkward moment, don’t you!”

She added: “Sorry this is so awkward. I’m really sorry, Toby, it’s so awkward!”

Both Abigail and Mary had no hard feelings and said they’re rooting for Toby and Chloe.

During the reunion, some viewers called for a new presenter next year.

One wrote on Twitter, “I’m BEGGING we get a new host next year,” while another added: “We need a new host for next year. I’m sorry Laura is just not it.”

A third added: “Laura girl you’re making it awkward between everyone.”

However, others loved Laura as host.

One said: “As always big love and respect to @thewhitmore. One of the best role models on the TV and social media.”

Another told her: “Wow, you did amazing!”