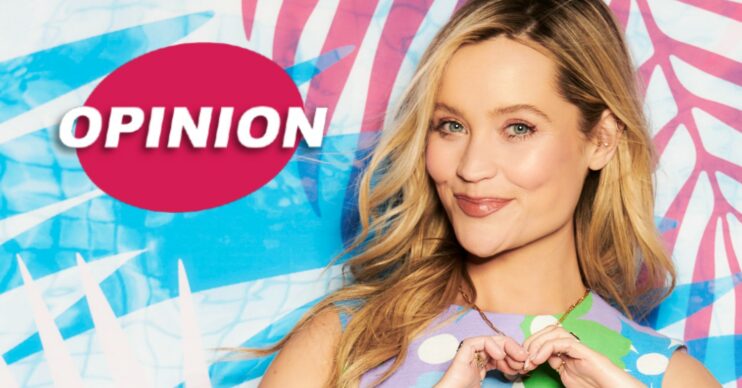 And so just like that Love Island 2021 is over – and it’s a good time for bosses to look at a revamp, namely a new presenter such as Maura Higgins – so says Entertainment Daily writer Charlotte Rodrigues.

Love Island is something I look forward to every year.

The show makes for great entertainment. The reality TV series is narrated brilliantly by Iain Stirling and is presented by his wife Laura Whitmore.

But, while Laura did a good job presenting the winter Love Island last year and Love Island 2021, I do feel it’s time to let someone else take over the role.

She had big shoes to fill after the lovely Caroline Flack left the show, and she doesn’t have Cazza’s lovely shoulder-to-cry-on appeal.

Plus, Laura’s love life has been pretty straight-forward – so how can Islanders empathise with her?

We need someone who’s been immersed in the drama!

So who could replace Laura?

In my opinion, Love Island needs a presenter who has been on the show before and has an understanding of what it’s like to be in the villa.

I also feel as if Laura is lacking the comedic side of being a presenter… She certainly hasn’t got her hubby’s banter.

Of course I understand she has to stay professional, but it would be good to see someone who is known for being funny and has experience on the show.

I was a huge fan of Maura Higgins when she was on the show. Not only is she hilarious, she’s very open about who she is and doesn’t hold back.

And, after pursuing Curtis and breaking Amy’s heart, she’s a woman who gets what she wants.

Watch your back, Whitmore!

It was recently revealed that Maura would be the presenter of Glow Up Ireland, so we will get to see her take on a presenting role.

I think she’s going to be great as a presenter and I would seriously love to see her take over Love Island.

Not only does she have a cracking sense of humour, she’s super-fiery.

I get the feeling Maura would definitely give the contestants a good grilling on Aftersun – which is what we need to see!

With Maura’s presenting and Iain’s narration, it would definitely give the show a good boost.

And increased ratings are surely something ITV wouldn’t turn down as Love Island competes with ever more popular dating shows such as Married At First Sight and Love Is Blind.

Another person who I think would be great for role is Dani Dyer.

Dani has her own YouTube channel and won the show back in 2018 with then-boyfriend Jack Fincham.

She has TV experience not only on the show, but recently appeared in EastEnders alongside her dad Danny Dyer, playing Jeanette.

She’s got a great personality, seems very kind-hearted – much like Caroline – and when she was on the show back in 2018, she quickly became everyone’s friend and very much tried to help everyone when fights or drama kicked off.

I think the fact she won the show and was on it from the very beginning shows she has the experience needed to add weight to the show.

Plus she certainly has the knowledge of how Islanders will be feeling.

And, as Love Island fans know her so well, we’ll feel we can connect more with the show – another ratings booster if you’re reading, ITV!

Dani also has that funny side to her which, like Maura, I think would make for a good presenter.

Of course, Dani only recently gave birth to son Santiago, but in the future I hope she’s considered to take on the role.

I just feel as if Laura hasn’t got the fiery side to her that Maura and Dani could bring. We need someone with a bigger personality.

Laura can also be a bit too nice – we need someone who’ll take a risk, someone with Maura’s venom to spice things up.