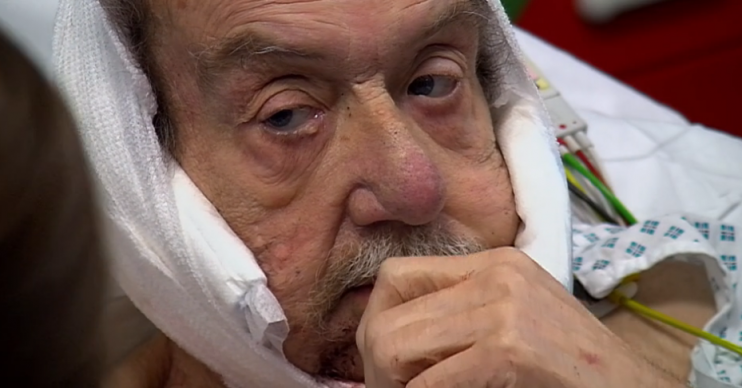 His partner said she misses "everything about him"

Fans of Channel 4 documentary series 24 Hours in A&E were brought to tears last night (May 21) after finding out an elderly patient had passed away after filming.

Bleeding badly from a tumour in his neck, 77-year-old Edwin Jukes was rushed into hospital with his partner Jeanette at his side.

Speaking on the programme, Jeanette explained that she lost her first husband and got a another chance at love nine years later with Ed.

Towards the end of the emotional episode, Ed lay surrounded by his family.

A message appeared on screen to tell viewers he was in hospital for seven days, before Jeanette revealed: “He had quite a few bleeds and then they came to talk to us about a hospice or what do we want to do. I said I want you home and he said, ‘I want to come home’.”

Ed’s best pal, Keith, said he hoped his friend would pull through by some “miracle”.

But his condition worsened and Keith confessed: “At that point I was angry with the world. One of the best people in the world was about to be taken from me.”

A tearful Jeanette explained: “Then suddenly he died. He died. I miss him terribly. I miss his presence, his laughing, his cross-wording. This sounds crazy – creeping up behind me in the kitchen and making me jump. I miss everything about him. Everything.”

Heartbroken viewers took to Twitter after hearing Ed’s story, as one wrote: “Absolute wreck watching #24hoursinAE. Such a heartbreaking story.”

A second tweeted: #24HoursinAandE always breaks me. Makes me so thankful that everyone I love is alive and okay and has their health today, and that’s the best we can all ever hope for.”

Someone else said: “Did anyone else just bawl their eyes out watching #24hoursinAandE or just me?”

Another wrote: “That was a hard watch at the end. Want to give her a big hug #ripEdwin #24HoursInAandE.”

That was a hard watch at the end. Want to give her a big hug. #ripEdwin #24HoursInAandE