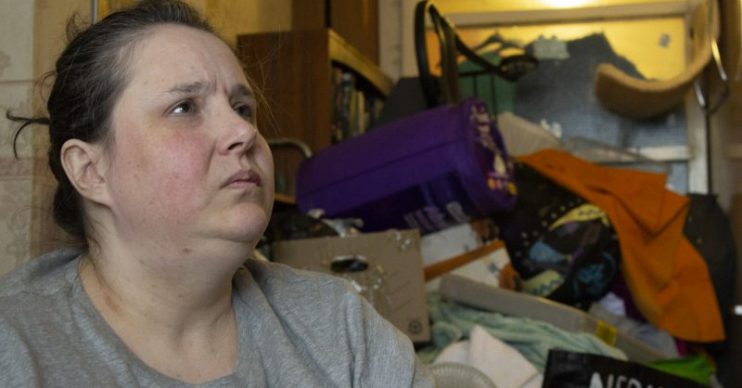 A self-confessed hoarder has stunned specialist cleaners with a home so cluttered and dirty she was unable to reach her toilet and had to urinate in empty plastic bottles.

Sally-Ann’s flat in Dudley, West Midlands, was so clogged with filth it had become a bio-hazard, with maggots wriggling away in the kitchen amid mountains of mucky paper plates and rotting food.

The council was called in two years prior after receiving complaints from neighbours and spent six days getting it clean.

But after that, the mess continued to build and Sally herself described her living conditions as “hell”.

Her cats do their business wherever they like, leaving piles of poo dotted all over the flat.

Sally, who is set to feature in a new documentary on Channel 5, says her mum’s death and her own struggle to look after her dad triggered the hoarding.

She says: “I couldn’t get to the toilet in time because I’d have to climb over all the rubbish so I started urinating in bottles.

“The cats were sleeping around me as well and they’d end up messing in certain corners of the bedroom. I created a hell basically to live in.”

There are believed to be around 1.2 million hoarders in the UK today.

Sally says her problem is not that she doesn’t want to throw things out, but that she “can’t be bothered” to get rid of any of it.

It started, she explains, when she moved in on her own: “My place used to get untidy anyway, like everyone’s does. And then all of a sudden I had to put the bin out and I just thought, ‘Oh my god’.”

The programme’s two specialist cleaners, Caz and T, are stunned by what they find when they see the flat and annoyed that Sally let it get so bad, particularly as she received 18 months’ worth of counselling and aftercare when her flat was first cleaned.

Working together to make her home livable again, it takes the cleaners four days to get it in shape.

What do you think of Sally’s flat? Leave us a comment on our Facebook page @EntertainmentDailyFix and let us know what you think of this story.