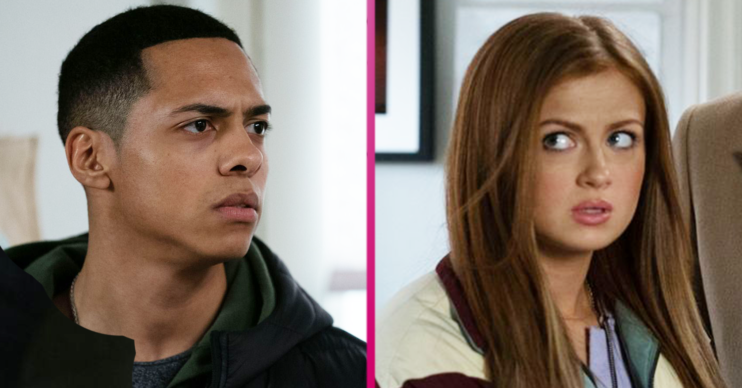 Why does Keegan leave Tiffany in EastEnders? Racism storyline explained

Keegan wants to quit Walford with his mum Karen

Keegan and Tiffany have been on the rocks for weeks in EastEnders.

Sadly, it looks like their marriage could be over for good in tonight’s episode (June 2).

After his mum Karen reveals her plans to leave Walford with baby Kayden, Keegan asks if he can go too

In a devastating blow to Tiffany, her husband doesn’t want her to join them, leaving her heartbroken.

But why does Keegan (Zack Morris) want to leave Tiffany (Maisie Smith)?

Why does Keegan leave Tiffany in EastEnders?

Keegan is at breaking point and Tiffany cannot understand why.

Over the last few months, he has endured a number of racial injustices and her ignorances has taken its toll.

Keegan has been stopped and searched “more times than he can remember” by the police without explanation.

Making matters worse, he was also wrongly arrested after Tiffany’s wedding ring was stolen – which he of course bought.

When the cops arrived, they didn’t just arrest him.

Officers at the scene jumped on Keegan and aggressively slammed his head onto the pavement.

This results in him suffering an injury while the actual thief, who was a white man, was able to escape.

After the incident, Keegan was taken to hospital for treatment.

However, after being kept waiting for hours, the lad grew impatient and began venting.

Security then forced him to leave hospital grounds after accusing him of aggressive behaviour.

How did Tiffany react?

After seeing the impact these experiences had on her husband, Tiffany wasn’t remotely understanding.

She even compared racism to her dealing with being called ginger.

The couple suffered another blow when Keegan’s application for a business loan was rejected.

Ever since, Keegan has increasingly distanced himself from Tiffany.

Notably, when his food van was vandalised, he rejected her attempts to comfort him.

Instead, Keegan turned to his mum Karen following the ordeal.

Could his plans to leave the Square be the final nail in the coffin for Walford’s newlyweds?

EastEnders is on BBC One on Mondays at 8pm and Tuesdays at 7.30pm.

What do you think of Keegan and Tiffany’s storyline? Leave us a comment on our Facebook page @EntertainmentDailyFix and let us know your opinions!