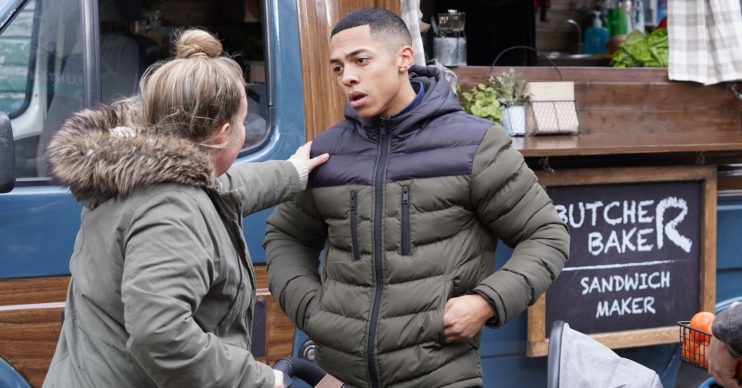 Keegan has been through a lot over the last few months

EastEnders fans have begged for the soap to give Keegan Butcher-Baker a break after his van was trashed in last night’s episode (Monday, May 25).

Over the last few months, Keegan has been struggling as police began stopping him almost everyday for searches and accusing him of crimes he didn’t commit.

In last night’s episode he was cleared of all charges after the incident at Vinny’s party and it looked like things were on the up for Keegan.

As the young businessman began working, selling sandwiches from his van, he had a customer approach to buy lunch. He soon told Keegan he ran a few businesses and they should work together

Keen on the idea, Keegan agreed. But the customer soon asked Keegan if he could get hold of some pills, assuming Keegan’s business was a cover for selling drugs.

Furious at the assumption, Tiffany laid into the man and threatened to call the police.

Later, the man returned with a group of his friends and proceeded to vandalise Keegan’s van.

As well as smashing the windows, destroying the signs and using spray paint on it, the group of thugs stole a pair of shoes from Keegan.

The shoes belonged to his friend Shakil, who died in 2018 after being stabbed.

EastEnders fans were devastated for Keegan and have begged for the show to give him a break.

The scriptwriters need to give Keegan a lucky break. It's all getting too much now. #EastEnders

Why can’t #EastEnders give #Keegan a break 🤬😤 @bbceastenders 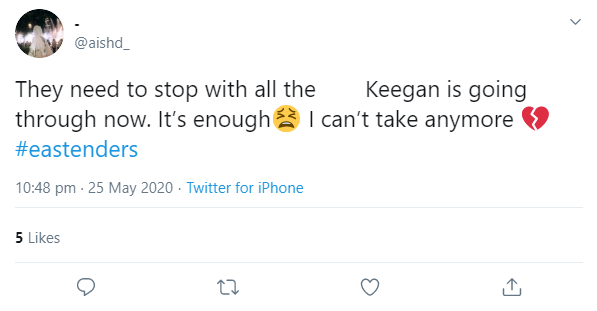 @bbceastenders #EastEnders Why didn't the market traders help Keegan? I hate it when the script writers pick on a character. Also can't stand Suki. Maybe when they run put of episodes it might be time to give up 🤷‍♂️

Don’t think I can watch much more of #Eastenders with the keegan storyline. It’s so upsetting to watch 😭

What else has Keegan been through?

Most recently, he was arrested after police Vinny’s party got out of hand. After a brick was thrown at a police car, an officer believed it was Keegan’s doing. Shortly after the incident, Keegan was pushed towards the policeman, making it look as if he was going to attack.

He was arrested and things soon got much worse as he and Tiffany were evicted from their flat.

Eventually footage managed to prove Keegan didn’t throw the brick and he was pushed.

EastEnders: What’s next for Keegan?

In next week’s episodes, Karen prepares to leave Walford and move away.

Keegan talks to his mum as she packs up and asks to move away with her.

Meanwhile, Tiffany gets advice from Denise on her relationship. Afterwards, she begins to feel happier and tells Keegan she loves him.

But will he reveal his plans to leave?