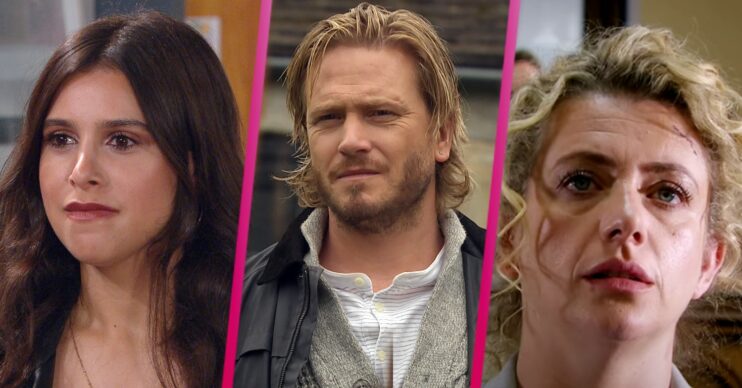 Who is David Metcalfe in Emmerdale and how many ex-wives does he have?

Serial monogamist David Metcalfe in Emmerdale is never without a beautiful woman on his arm.

He’s had romances with just about every eligible woman in the village, including Nicola King!

His ill-fate romance with Nicola is just one of his many, many misteps when it comes to the opposite sex.

So who is David and what’s his story?

When did David Metcalfe arrive in Emmerdale?

David came to the village looking for his estranged dad, Eric Pollard. Eric had left David’s mum before he was born, stealing a hefty wad of her cash into the bargain.

Read more: How old is April in Emmerdale?

When Eric finally discovered David was his son, he wasn’t happy. He even did a secret DNA test that mistakenly proved David wasn’t related to him.

But eventually the pair discovered they were father and son and they began building some bridges. Though Eric’s habit of swindling and manipulating the locals played havoc with David’s romances with Delilah Dingle, Katie Sugden and Jasmine Thomas.

David also had a tempestuous relationship with Nicola King – then Nicola De Souza – with both of them cheating on the other. This is definitely one they’d both rather forget – and indeed, it seems they have because they rarely speak to each other at all now.

David fell in love with sassy Leyla Harding, who worked at Eric’s factory. The pair were building a life together until Leyla revealed she had a secret son – Jacob Gallagher. Leyla’s sister Alicia was bringing Jacob up. The news almost broke the couple up especially when David discovered Jacob’s father was Leyla’s brother-in-law. Oops.

With everything out in the open, David and Leyla began planning their wedding.

Alicia came to the village and stayed even when Leyla left heartbroken David on the eve of their nuptials, with her wedding dress and a lot of debt.

David grew close to Alicia and Jacob. When Alicia was sent to prison they got married so Jacob could stay with David.

While Alicia was inside, David fell in love with Priya Sharma.

When evil Cameron Murray held drinkers hostage at the Woolpack, Alicia was shot. David realised he loved her and called off his relationship with Priya to be with Alicia.

Priya discovered she was pregnant with David’s baby. But it didn’t stop Alicia and David getting married.

Leyla arrived back in the village on their wedding day, but even that didn’t derail their plans.

Priya gave birth to a baby girl, named Amba, and she and David now happily co-parent their daughter.

Alicia and David eventually split after Alicia was assaulted by Lachlan White and wanted to leave the village.

Did David in Emmerdale have cancer?

In 2016, David persuaded his dad to go to the doctor because he was having a few troubles that David was worried about.

Eric only agreed if David went too. Although Eric was given the all-clear, David was eventually diagnosed with testicular cancer.

Jacob supported David through his treatment, bringing the father and son even closer.

By now, David was married to Tracy Shankley and she also supported him. 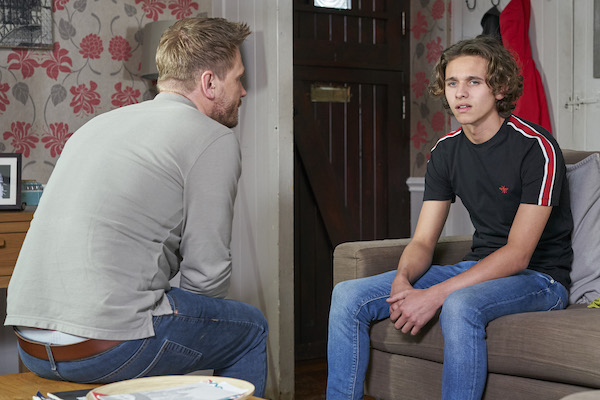 After David’s marriage to Tracy fell apart, he started a relationship with Jacob’s teacher, Maya Stepney.

She was perfect on paper – beautiful, funny, and a good influence on David’s son, Jacob.

But behind the scenes, Maya was grooming teenager Jacob, and starting an illicit relationship with the lad.

Jacob’s mum Leyla and former stepmums Priya and Tracy found out the truth. And when David found out, he was horrified.

It took David a while to come to terms with what had happened to his beloved son. However, David supported Jacob as he gradually came to understand his relationship with Maya was abusive.

At Christmas 2019, David and Jacob found a baby boy on their doorstep with a note from mother Maya asking them to take care of him. David soon discovered he was the baby’s father – not his grandfather.

He named his new son Theodore Eric and after a shaky start, he is now a devoted single dad to the little lad.

David’s now in a relationship with scheming Meena Jutla. But he has no idea Meena is a killer after she murdered Leanna Cavanagh. Can you see a pattern forming here?

In true David style, he’s found himself torn between two women as he has fallen in love with Victoria Sugden.

Murderous Meena’s used to getting her own way, though, and she won’t let anyone take her man. Meena was especially annoyed when she discovered David had risked his life to save Victoria.

Wanting to make sure they can NEVER be together, Meena is plotting Vic’s murder. But will anyone expose her? And will David realise he had truly dreadful taste in women and swear off them for good?